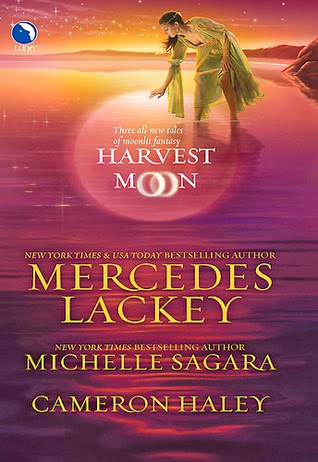 Kidnapping Persephone should have been an easy task. But in the Five Hundred Kingdoms, nothing's ever simple-and the wrong blonde goddess is stolen by mistake, leaving Prince Leopold without his new bride. At least until he braves the realm of the dead to get her back.

Barely a teenager, Kaylin Neya is a thief, a fugitive and an attempted assassin. She also has a smart mouth, sharp wits and mysterious markings on her skin. All of which make her perfect bait for a child prostitution sting in the city of Elantra-if she survives her first meeting with the Hawks!

In the underworld, there are tricks to killing. Like executing rivals at crossroads so ghosts won't follow you home. But sometimes retribution is hard to avoid-and now a supernatural hit man has a contract on Domino Riley's life. Luckily she knows a thing or two about death.

My Review:
I loved all these stories! And I'll do about a paragraph for each one, in the order that I read them, because, well, why not, since I didn't read them in order, because I mostly wanted to read Cast in Moonlight. Yep.

So, Cast in Moonlight, we got a lot of different POV's, like Caitlin's, which was pretty darned awesome, and we got to see Kaylin just start with the Hawks, shortly after she tried to assassinate the Hawklord. And we saw her learn a bit about her different magic, and how she saw it, which was great, and then the ending, with her pretty much getting an apartment, and her being the Hawk's mascot! So sweet! The one thing I didn't get was, how there was a prostitution ring. I thought it was more of a murdering kids ring then prostitution. Other then that, it was fantastic!!!

A Tangled Web, was hilarious. Persephone wants to be kidnapped, because her mom wasn't letting her grow up, and she was in love with Hades, thought he presented himself as a simple shepard. But Thantos then kidnaps another immortal, and if a immortal is taken to the Underworld by the god of death, then technically, they're dead. So that caused lots of problems, including how to get Leo and Brunhilde back together. And yeah, I'm going to have to read this series because this was an awesome novella!

Finally, Retribution, was part mystery, part paranormal, and all amazing! I just loved it, it was interesting, funny, different, and yeah, basically, she kills a guy because he tried to kill her, he puts a death curse, and she spends most of the time trying to take it off/get rid of it. And then the whole plot came out near the end, and while pretty clever, it was diabolical. Plus there was dealing with the first half of the curse-3 days of being tormented by maybe the angel of death, Samael. Yeah, it was pretty darn excellent!!!

I just loved these novellas, can't wait to read the series that they are in!! Because these were excellent worlds!!!