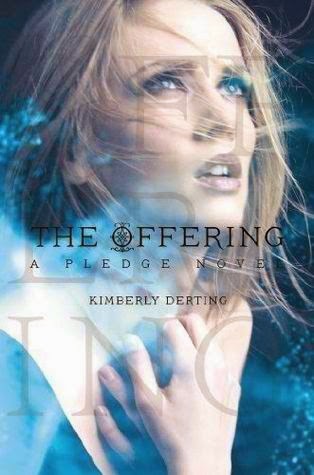 From Goodreads:
True love—and world war—is at stake in the conclusion to The Pledge trilogy, a dark and romantic blend of dystopia and fantasy.

Charlie, otherwise known as Queen Charlaina of Ludania, has become comfortable as a leader and a ruler. She’s done admirable work to restore Ludania's broken communications systems with other Queendoms, and she’s mastered the art of ignoring Sabara, the evil former queen whose Essence is alive within Charlie. Or so she thinks.

When the negotiation of a peace agreement with the Queendom of Astonia goes awry, Charlie receives a brutal message that threatens Ludania, and it seems her only option is to sacrifice herself in exchange for Ludanian freedom.

But things aren't always as they seem. Charlie is walking into a trap—one set by Sabara, who is determined to reclaim the Queendoms at any cost.

My Review:
I enjoyed this book. I'm pretty sure that The Pledge was the best book for me in this series, but this, and The Essence were really great books on their own. Just that they were in a series, with The Pledge, they didn't quite make it back up to what The Pledge started with.

I felt bad for him, getting his hand cut off by someone he thought had been his ally, and yeah, just getting betrayed like that, wasn't too fun to be read. Well, we only got the tail end, the hand cutting, in the prologue. But that was quite enough!

We learn a bit more about Eden, about her brother, and some about some states of Ludania, the camps that the unwanted or orphaned children were sent to. And while there was some sadness to that, there was a bit of hope, because Charlie is Queen, and that she was changing things.

One reason why The Pledge was good, was that it had Max, and Charlie together, and most of The Essence and The Offering, they were apart. So there is that. I guess I have a romantic's heart, in wanting them to be together, but yeah.

While the ending, with Elena having Eden killed because Charlie wouldn't let Sabara/Layla out of her to wreak chaos and strife. But that she would for Brook, and the fight that came out of that. One thing I'm wondering about, then is if Niko was actually dead. I'd think that someone would've fatally shot him in his long life, and yet he was still alive. So there's that. I liked Sage, she was quite a kick ass character, I think the girl that was there in The Essence when Charlie and Brook were separated.

Yeah, this was a great book, it pretty neatly wrapped up the series, and I really enjoyed it!