Week 15 Reviews: To Tame a Highlander Warrior, The Highlander's Touch 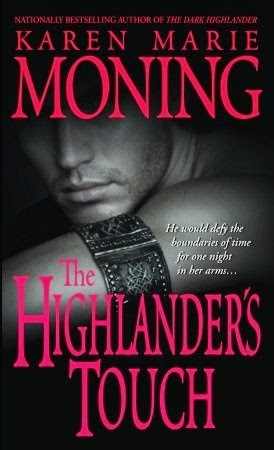 From Goodreads:
A Woman's Tender Touch

He was born to a clan of warriors of supernatural strength, but Gavrael McIllioch abandoned his name and his Highland castle, determined to escape the dark fate of his ancestors. Hiding his identity from the relentless rival clan that hunted him, he called himself Grimm to protect the people he cared for, vowing never to acknowledge his love for ravishing Jillian St. Clair. Yet even from afar he watched over her, and when her father sent an urgent summons, "Come for Jillian," he raced to her side—into a competition to win her hand in marriage.


Why had he run from her so many years before? And why return now to see her offered as a prize in her father's manipulative game? Furious, Jillian vowed never to wed. But Grimm was the man she loved, the one who urged her to marry another. He tried to pretend indifference as she tempted him, but he could not deny the fierce desires that compelled him to abduct her from the altar. She was the only woman who could tame the beast that raged within him—even as deadly enemies plotted to destroy them both....

From Goodreads:
A Warrior Of Immortal Powers

He was a mighty Scottish warrior who lived in a world bound by ancient laws and timeless magic. But no immortal powers could prepare the laird of Castle Brodie for the lovely accursed lass who stood before him. A terrible trick of fate had sent her 700 years back in time and into his private chamber to tempt him with her beauty - and seduce him with a desire he could never fulfill. For this woman he burned to possess was also the woman he had foresworn to destroy.

A Woman Caught In The Mists Of Time

When Lisa felt the earth move under her feet, the fiercely independent 21st-century woman never dreamed she was falling...into another century. But the powerful, naked warrior who stood glaring down at her was only too real...and too dangerously arousing. Irresistibly handsome he might be, but Lisa had no intention of remaining in this savage land torn by treachery and war. How could she know that her seductive captor had other plans for her...plans that would save her from a tragic fate? Or that this man who had long ago forsaken love would defy time itself to claim her for his own...

My Review:
My, oh my, this was just freaking wonderful!!! 2 wonderful Highlander books, with great characters, great stories, from Tame, with 2 historical characters, to Touch, with a really historical character (Like 500 years old historical) and a modern day woman. From a Berserker, from the Norse gods, to Adam Black the Fae from #1, yeah, these 2 books were simply amazing!

These couples were really fun to read about! They had a "were childhood friends turned because they were in love with each other but couldn't be with each other, and only one of them knew it" to "never met each other till then" and yeah, it was just great!

Ramsey Logan, you were supposed to be a suitor. But you turned out to be an attempted murderer, and a kidnapper, and another attempted murderer-of the same person. Shame on you, because of the money. And shame on the McKades for being jealous of power, and then blaming your acts on the fact that you thought that they worshipped Odin instead of God. Bad, bad, bad, and that's why you lost, haha!

I loved the end of Tame, with the mistletoe, and how each kiss underneath it brought good to the world, so the 2 couples that formed during book #1 just stood under it, and just kissed, it was nice and sweet, and it was fun to read it!!!

I loved reading these books, they were interesting, they were funny, they were entertaining, and they fun. They were great to read, and yeah, I can't wait to read more!!!

To Tame a Highlander Warrior: