Yeah, we have the beautiful and amazing cover of Queen of Shadows by Sarah J. Mass! And I am freaking excited, you should've seen Winky after I saw that we had it!!! 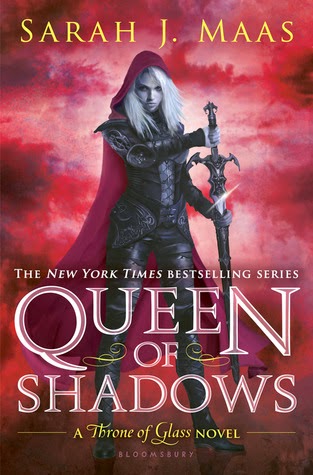 Everyone Celaena Sardothien loves has been taken from her. But she's at last returned to the empire—for vengeance, to rescue her once-glorious kingdom, and to confront the shadows of her past . . .

Celaena's epic journey has captured the hearts and imaginations of millions across the globe. This fourth volume will hold readers rapt as Celaena's story builds to a passionate, agonizing crescendo that might just shatter her world.


Gah, I really can't wait for this book! Heir of Fire was just so freaking great! Apparently the only thing that is 100% in the book is her short hair, and she does have a sword and a suit, but they're not quite what's pictured, but she has them, so yeah, awesome! I just love the red-ish background, so pretty, and one of my favourite colours! Which hopefully means that this book is just as good as Throne of Glass, which had my other favourite colour, blue. And I don't doubt it will, seeing as each book has just been getting better (and longer, which is really great!) and Heir of Fire, currently the best, has my least favourite colour, green! Yeah! And I'm only 8 days behind on finding this! So what about you guys? Happy reading!
Posted by Louisa @ Words I Write Crazy at 3:34 PM