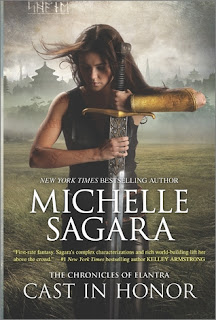 My Review:
I was so excited to read this book! Like, majorly, because just like Cast in Flame, I'd been looking pretty obsessively on NetGalley for it to go up-because it had to go up!-and when it did, I just read it immediately! Because I needed to read it, so much!

The one part where she's talking to him, and when you read it, you'll know who I'm talking about, and she says something, and he talks about her education and improving it. She asks a subsequent language, and he ups the immediacy of that future talk. Which was so freaking hilarious! I loved it, just a classic Kaylin!

I know that we most likely won't see two characters that we were introduced to in this book. Which is too bad, because they were really interesting, if hard to understand! And they had a big impact on this book, they were pretty integral

Time was a pretty big thing in these books. So were the mirrors, and the network there, yeah, they were kinda the big main conflict! And connected to Nightshade, and his disappearance, and the new characters! It hurt the head to think about, but just so awesome!

But this book gave a quick little tidbit-about the Destroyer. And how it's caged like the other elements, but asleep. I thought that he was awake, but I guess not! At least that explains why he hasn't been mentioned on her visits to the Garden!

We didn't learn very much about who the bad guy was. And with what Kaylin saw in his eyes, makes me think that there's a back story there, why he did what he did, but we'll never know. And that sucks, but oh, well!

There was a bit about the relationship between Kaylin and Severn, and how he does feel desire for her, but he wants to make sure that she wants it, her, not because he holds her name. So that happened, too! I can't wait to see where it's going to go!

That ending, the actual ending, was a bit bittersweet. I know I say above that we most likely won't see these characters again, in fact, it's almost guaranteed-and it's because of this ending, and the events that led up to it.

Yeah, another really fantastic instalment in this series, and I can't wait for the next one! Maybe it'll be an Aerian book, since there was some conflict there that was building up! And oh, it could be called Cast in Flight or something!