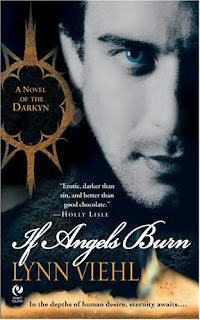 From Goodreads:
What if vampires were the victims and humans the predators? This is the underlying premise of Lynn Viehl's most unusual love story, If Angels Burn. It is the first in a suspenseful new series about the Darkyn, vampire-like creatures persecuted by humans since the Middle Ages. When Dr. Alexandra Keller is recruited -- kidnapped, actually -- to perform reconstructive surgery on a reclusive New Orleans millionaire, she finds more than a patient in need of a new face. She meets a compelling being, Michael Cyprien, who engages her on the most primal of levels and inspires her to help his people. Alex's battle to heal her patient and her struggle to regain control of her own emotions is paralleled by the story of her brother, a tortured monk who allies himself with the Brethren, a Vatican-sponsored enemy of the Darkyn.

My first review of If Angels Burn
My review:
It was really fantastic to reread this book! I'd forgotten most of it, how the world worked, and all the terms used. But it was just so awesome to fall back into this world, and watch their stories unfold! It's such a great series!

For some reason, I combined this book, with the future ones in my head, because I thought that Alexandra would be at the head guy's place in Ireland. But nope, that's not going to happen this book, but in the future!

The whole world, with the Darklyn and their servants, that they were the crusaders, and the Brethren, besides the three traitors, not, yeah. So interesting to read and learn again! And the scents of each person! And the gifts that they have!

Loved Alexandra and her modern day take on things! It was pretty hilarious to watch Michael and his people learn to deal with her, and understand what she was saying. But she was also right, that they hadn't moved forward with the times in their thinking. So yeah, really great to read!

Such a fantastic book, and I can't wait to read more, this series and this author is so fantastic!