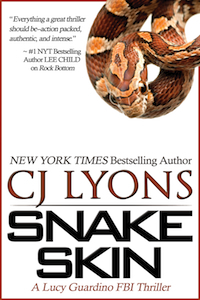 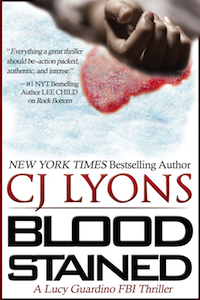 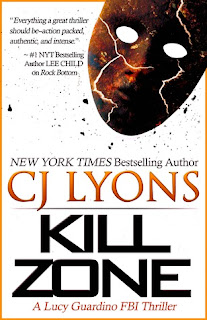 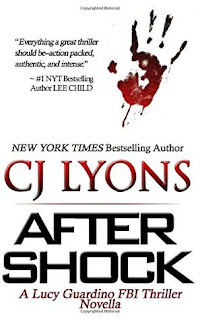 From Goodreads:
WARNING: the Lucy Guardino FBI Thrillers are NOT for the faint of heart! They depict adult situations, realistic violence with consequences, and delve deep into the darkness of the human heart and mind.

Lucille Teresa Guardino. A woman of many identities. Lucille to her doting mother, Lulu to her devoted husband, Mom to her pre-teen daughter, Lucy to her friends, LT to her co-workers, and Supervisory Special Agent Guardino to the criminals she captures for the FBI's Sexual Assault Felony Enforcement squad.

Until the day she comes up against a predator more vicious and cunning than any she's ever tackled before, one who forces Lucy to choose between the life of the young victim she is fighting to save and her own daughter's....and Lucy's dream life is shattered.

Until recently Supervisory Special Agent Lucy Guardino was a shining star in the FBI’s roster. But after killing a man and disobeying orders, Lucy's been sidelined, chained to her desk. When a mysterious letter arrives hinting that, thanks to Lucy, the wrong man was blamed for a string of serial rapes, kidnappings, and killings four years ago, Lucy jumps at the chance to re-open the case–despite orders to leave well enough alone.

Her unofficial investigation takes her back to the small town that thrust her into the spotlight four years ago when she saved the killer's last victims–before the killer took his own life and the life of one final victim, a mother who left a ten year old son and loving husband behind. What Lucy doesn't know is that what happened four years ago was all a lie, fueled by sacrifice and betrayal, designed to shield the real killer.

With the lives of her family, a group of innocent children, and the future of one desperate boy at risk, Lucy races to stop an innocent from killing and a killer from butchering more innocents.

From Goodreads:
Lucy's back! In a story ripped from the headlines, the violence is the worst she's ever seen, the stakes are higher than ever, and then...things get personal.

It's a vicious, horrific crime: the brutal killing of a teenaged girl. When Pittsburgh detectives call FBI Supervisory Special Agent Lucy Guardino to the scene, their focus is on who and why?

Was it the girl's Afghan father striving to regain his honor after she became too Westernized? Her Jewish boyfriend? Someone from Afghanistan settling an old grudge? Or one of the many drug cartels the father helped the DEA bring down seeking revenge?

Former Marine Sergeant Andre Stone has been home a month, but he has yet to leave the safe haven of his grandmother's house--other than to go to his appointments at the VA's burn clinic. Andre's disfiguring physical scars are the least of his worries. The emotional wounds of seeing his men massacred in a DEA raid gone horribly wrong have left him a walking dead man, numb to anything.

All he can think about is revenge. On Rashid Raziq, the man behind the raid. When Andre is offered a chance at vengeance, the only question left is: How far will he go to get it?


The answers seem clear when Pittsburgh becomes engulfed in flames as a violent narcoterrorist turns the city into a kill zone...But in the dark of night, surrounded by men intent on destroying the truth, Lucy and Andre both learn that secrets hide in shadows.

From Goodreads:
As head of the FBI's Sexual Assault Felony Enforcement Squad, Agent Lucy Guardino has made a name for herself bringing the lowest of lowlifes to justice. Rapists, serial killers, pedophiles? She's faced them all down with her signature grit and determination. But today is different. Because the man who has taken her prisoner has promised Lucy three things: that before this day is over, she will be dead; that someone in her family will also die; and that he always wins. Trapped inside her worst nightmare, Lucy faces a ruthless killer as he plays Russian roulette with the lives of those she loves. Wounded and unarmed, how can Lucy defeat a psychopath who doesn't play by any rules? After Shock is a heart-pounding, lightning-paced thrill ride that will leave listeners breathless as they root for the ultimate superheroine next door.

One big part of this series is who Lucy is. She's an FBI agent, a wife, a mother. and those things come into conflict with each other with demands on her time, energy and emotions. She works through things, sometimes stumbling, but yeah, that was a great journey to read about!

Gah, it was hard to read Snake Skin, thought, what with the snakes! I really hate snakes, they are my fear. So yeah, it was great that she didn't get bitten, but sad that the kids had died because they had before this series started.

I really enjoyed these mysteries, the high paced kidnapping, the closed cold case that isn't closed or cold anymore, and the mob incidents that are actually dialled down from real life. Which is rather scary if you think about it!

Loved reading these books, they were so awesome, and I can't wait to read more!