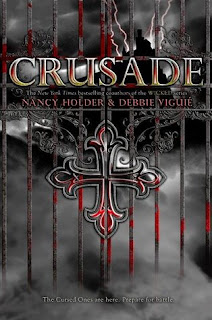 From Goodreads:
For the past two years, Jenn has lived and trained at Spain's Sacred Heart Academy Against the Cursed Ones. She is among the few who have pledged to defend humanity or die trying. But the vampires are gaining power, and the battle has only just begun.

Forced to return home after death takes a member of her family, Jenn discovers that San Francisco is now a vampire strong-hold. As a lone hunter apart from her team, Jenn is isolated — and at risk. She craves the company of her fighting partner, Antonio: his protection, his reassurance, his touch. But a relationship with Antonio comes with its own dangers, and the more they share of themselves, the more Jenn stands to lose.

Then Jenn is betrayed by one who was once bound to protect her, causing her to doubt all she had held as true. To survive, Jenn must find the courage to trust herself — and her heart.


My Review:
I really enjoyed this book! It was so original, from the characters, to the vampires, to the world, because yeah, the vampires pretend to be humanity's friends, but they're not, but only a few people in the world actually know that the vampires are bad. The Scared Heart Academy Against the Cursed Ones, is one place, one that actually teaches ways to destroy the vampires. Which is a good thing!

I really enjoyed the way the group was set up, that they were different from before, because before, it was just a lone warrior who was infused with the special stuff, and here, while there's still only one who has that, she has a group around her to help. And yeah, that was awesome!

You feel really bad for Jenn, because of the death in her family, and that her most hated enemies have taken over her city, and she's all alone, and then the things about Antonio, the fact that he's a vampire, and yet they love each other, well, yeah, it's complicated!

This was just a fantastic book, and one that I know has started such an excellent series! I can't wait to read more!