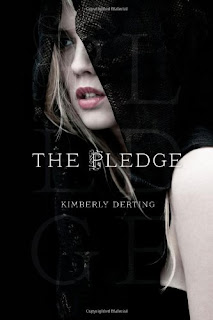 From Goodreads:
In the violent country of Ludania, the classes are strictly divided by the language they speak. The smallest transgression, like looking a member of a higher class in the eye while they are speaking their native tongue, results in immediate execution. Seventeen-year-old Charlaina has always been able to understand the languages of all classes, and she's spent her life trying to hide her secret. The only place she can really be free is the drug-fueled underground clubs where people go to shake off the oppressive rules of the world they live in. It's there that she meets a beautiful and mysterious boy named Max who speaks a language she's never heard before . . . and her secret is almost exposed. Charlie is intensely attracted to Max, even though she can't be sure where his real loyalties lie. As the emergency drills give way to real crisis and the violence escalates, it becomes clear that Charlie is the key to something much bigger: her country's only chance for freedom from the terrible power of a deadly regime.

My Review:
Well, this week seems to be one for best books of 2012, because this is the 3rd one! And such a great book it was! From the characters who have issues that can cause blood to boil-namely mine, but I know other people would be frustrated that Charlie had to face those problems, that they were in such a bad world like that-to a plot that captivates and entrances and/or enchants you, The Pledge is a must read, from start to finish, besides being such a fly-by read!

It's hard to describe such a perfect book, having the right balance of action, clue-dropping mystery, conflict, and romance, a delicate touch, that leads to such a book as The Pledge. I mean, I loved everything about this book, even while I was hurting over the deaths and the pain suffered, that's how perfect this book is, how much you feel while reading it!

And then the ending left it wide open for the sequel, The Essence, and in a fantastic place, too, with the whole "pass down the queen's essence so she can live forever" thing, that's going to be a lot of conflict, and with Charlie becoming the new ruler, well, things are going to be different, and I bet a lot of people aren't going to like that!

The Pledge is a simple, must read right now read, because it is dripping in awesome sauce, is completely loveable, and is, just a great book, that I feel privileged to read! Now to find myself a copy!  So read The Pledge already if you haven't!