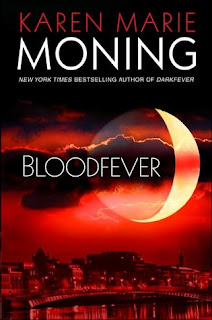 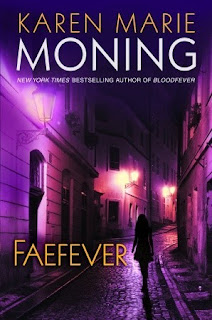 In her fight to stay alive, MacKayla must find the Sinsar Dubh—a million-year-old book of the blackest magic imaginable, which holds the key to power over the worlds of both the Fae and Man. Pursued by assassins, surrounded by mysterious figures she knows she can't trust, Mac finds herself torn between two deadly and powerful men: V'lane, the immortal Fae Prince, and Jericho Barrons, a man as irresistible as he is dangerous.

From Goodreads:
He calls me his Queen of the Night. I'd die for him. I'd kill for him, too. When MacKayla Lane receives a torn page from her dead sister's journal, she is stunned by Alina's desperate words. And now MacKayla knows that her sister's killer is close. But evil is closer. And suddenly the sidhe-seer is on the hunt: For answers. For revenge. And for an ancient book of dark magic so evil, it corrupts anyone who touches it.

As All Hallows' Eve approaches and the city descends into chaos, as a shocking truth about the Dark Book is uncovered, not even Mac can prevent a deadly race of immortals from shattering the walls between worlds—with devastating consequences...

My Review:
These were such fantastic books! I loved reading them, having more time in this world, with these characters! It was utterly fantastic, and as things get worse and worse, well, that just means for more for us to read!

Mac is changing with everything that is going on. And that's both good, and bad. Because she is in life or death situations frequently, and the changes are helping her survive. But it's also making her a not so nice person. But survival trumps nice!

There were a lot of things going on in these books, things that maybe seemed small at first, but then they became a big deal, and watching this from the beginning, well, this series is building up to something, and I can't wait to see what that is!

But then the endings of them! Bloodfever, that was pretty great, that they beat the bad guy, though that took a lot of struggle and pain. But oh, boy, that ending of Faefever? That was pretty darned evil, such a cliffhanger! Yeah that the next books are already out so I can just go read them!

I absolutely loved reading these books, and now I just really need to read more!