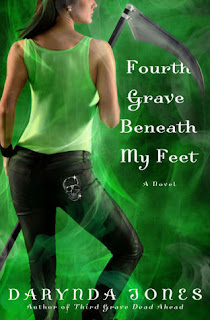 From Goodreads:
Sometimes being the grim reaper really is that. Grim. And since Charley's last case went so awry, she has taken a couple months off to wallow in the wonders of self-pity. But when a woman shows up on her doorstep convinced someone is trying to kill her, Charley has to force herself to rise above. Or at least get dressed. She quickly realizes something is amiss when everyone the woman knows swears she's insane. The more they refute the woman's story, the more Charley believes it.

In the meantime, the sexy, sultry son of Satan, Reyes Farrow, has been cleared of all charges. He is out of prison and out of Charley's life, as per her wishes and several perfectly timed death threats. But his absence has put a serious crimp in her sex life. While there are other things to consider, like the fact that the city of Albuquerque has been taken hostage by an arsonist, Charley is having a difficult time staying away. Especially when it looks like Reyes may be involved. Just when life was returning to normal, Charley is thrust back into the world of crime, punishment, and the devil in blue jeans.

My Review:
I enjoyed this book so much! It's just so good! And Charley is just amazing, because she's also real, she's still dealing with some personal stuff because of the ending of the last book, but then she's dealing with it, like last book that meant sleep deprivation, this time, it's a fear to leave her apartment building, and buying things online and from tv ads almost obsessively. She does have problems, and she works through them. She's real, with some regular, and otherworldly problems!

That twist with her client? That she was already dead? And Charley had known that whole time that she was investigating? That just put the whole thing in a different light, and yeah, while it was sad, that investigation wrapped up quite nicely!

We get more Charley and Reyes interaction! And yeah, it's just pretty epic, like they are! I just enjoyed reading about the 2 of them so much! They just live such interesting lives! I'm going to be pretty devastated when we stop getting new Charley and Reyes material!

Loved that ending! Between Reyes, and everything else that's going on, that was just perfect! There were some hard bits, but there's facing the bad guy, and there's beating the bad guy, and she did both! And just having Reyes moving into the apartment on her and Cookie's floor, was just great!

Loved this book so much, and yeah, I can't wait to read more!