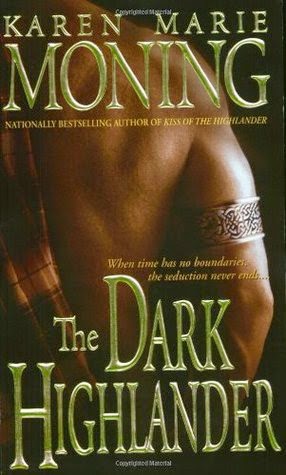 From Goodreads:
Journey to a world of ancient magic, breathtaking sensuality, thrilling time-travel.... Journey to the world of The Dark Highlander. Crisscrossing the continents and the centuries, here is a novel as gripping as it is sensual--an electrifying adventure that will leave you breathless....

"I am Dageus MacKeltar, a man with one good conscience and thirteen bad ones, driven to sate my darkest desires... "

From his penthouse lair high above Manhattan, Dageus looks out over a glittering city that calls to the darkness within him. A sixteenth-century Scot trapped between worlds, he is fighting a losing battle with the thirteen Druids who possess his soul, dooming him to an eternity of sexual pursuit. When Chloe Zanders, student of antiquities, is drawn into his world, she finds the insatiable alpha male an irresistible lure.

Before long, she is caught up in an ancient prophecy that will sweep her back into time to medieval Scotland. Plunged into a world of timeless magic and dark seduction, she will soon face the challenge of a lifetime: fighting thirteen evil spirits for the heart of one irresistible man....

My Review:
I really enjoyed reading this book! It was a lot like Kiss of the Highlander, because Daegeus and Drustan are twins, and they both start in the current times, go to the past, and come back. But they're different in characters, problems and solutions, and yeah, I really enjoyed that!

They have a really awkward first meeting, since they first off, just missed each other, though he saw her, he just didn't know that she was the one coming with the book. And then because she worried about it's safety, she investigated. Until he caught her under the bed, and she pretend to be a French maid! So hilarious!

I kinda thought that there'd be some conflict with the lady that he was sleeping with at the beginning, besides Chloe being jealous. I thought she might put up a scene or something. But nope! They certainly have enough going on!

In my stand alone copy, it ends a chapter and half a page, early. So where Chloe's still sad and mourning his presumed death. So I'm lucky I have a 7 book bundle of the series, so I could read the ending, and really have them get their happy ending, because it could not have ended there! So I'm glad that I had that, because that little bit of panic made me appreciate it more!

Favourite lines: "Though Chloe prided herself on sound morals, she suffered a shocking urge to tuck it under her arm and make a run for it." I can see that happening! "...pretending to be dumb in Latin seemed a bit far-fetched to her..." Yeah, me too! And so French is the language left to pretend to be dumb in! Well, apparently there's also Greek, but ditzy French maid? Stereotype! "Death by scrumptious Scots cuisine and fine crystal?" Maybe! "Poor man, she thought, smiling In her second trimester, she'd nearly punched him if he'd tried to touch her. Now, in her third, she was inclined to punch him if he didn't touch her." Aw, this is so cute!

Such a great book, and now to read more of this series! Need to finish it so I can get to Burned!