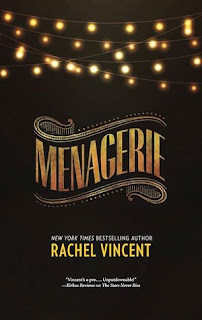 When Delilah Marlow visits a famous traveling carnival, Metzger's Menagerie, she is an ordinary woman in a not-quite-ordinary world. But under the macabre circus black-top, she discovers a fierce, sharp-clawed creature lurking just beneath her human veneer. Captured and put on exhibition, Delilah in her black swan burlesque costume is stripped of her worldly possessions, including her own name, as she's forced to "perform" in town after town.

But there is breathtaking beauty behind the seamy and grotesque reality of the carnival. Gallagher, her handler, is as kind as he is cryptic and strong. The other "attractions"—mermaids, minotaurs, gryphons and kelpies—are strange, yes, but they share a bond forged by the brutal realities of captivity. And as Delilah struggles for her freedom, and for her fellow menagerie, she'll discover a strength and a purpose she never knew existed.

My Review:
Loved this book so much! I did put off reading it for a while, because captivity is one of my buttons, and the whole situation in this book pressed that button hard, nudging on some of the other buttons, because my hand was sore after reading this book from clenching it from impotent frustration of the unfairness in this book! Yeah.

There was only one cryptid that I didn't like-Adira. Just because she was a princess, that doesn't mean that should could be like that. I felt really bad for Nalah, who had to give sexual favours in exchange for things like a bottle of water for Adira, because she's Adira's companion. Adira treated Nalah horribly and I really didn't like it! Which kinda makes me feel bad for what happened to her, but yeah.

She was kinda the reason that she was there, as well as Nalah, and Gallagher. So in a way, it was a good thing that she was so unlike-able that she'd do what she did, because Gallagher was there, and that was really great for everybody!

There were a few mysteries, like what kind of cryptid that she was, and a vengeance bound idea turned real is pretty cool, and was just so great to read! And it was awesome how they worked things out, because the good guys win without anybody noticing, though there were a few losses.

Really fantastic book, so enjoyable, and so great, and I can't wait for the next book!