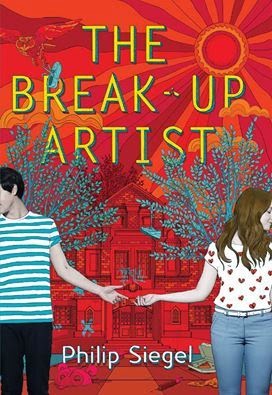 From Goodreads:
Some sixteen-year-olds babysit for extra cash.

Some work at the mall.

Becca knows from experience the damage that love can do. After all, it was so-called love that turned Huxley from her childhood best friend into a social-world dictator, and love that left Becca's older sister devastated at the altar. Instead of sitting on the sidelines, Becca strikes back—for just one hundred dollars via PayPal, she will trick and manipulate any couple's relationship into smithereens. And with relationship zombies overrunning her school and treating single girls as if they're second-class citizens, business is unfortunately booming. Even Becca's best friend, Val, has resorted to outright lies to snag a boyfriend.

One night, Becca receives a mysterious offer to break up the most popular couple in school: Huxley and raw football team's star player, Steve. To succeed, she'll have to plan her most elaborate scheme to date—starting rumors, sabotaging cell phones, breaking into cars...not to mention sneaking back into Huxley's good graces. All while fending off the inappropriate feelings she may or may not be having for Val's new boyfriend.

No one said being the Break-Up Artist would be easy.

My Review:
This book was so awesome! I enjoyed it so much, it was funny and great, awkward and fantastic, and totally enjoyable! I enjoyed these characters, and the situations that Becca gets herself into because of the job that she gets to break up the "it" couple of her school.

I could empathize with her need to want to break up couples, from what happened with her sister's almost wedding, to the fact that most of the students are female, making for slim picks, coupled with the schools obsession and elevation of couples!

This book, for me, was about relationships. Both romantic ones of the couples that she was breaking up, as well as the one between friends, and how it can grow and change, but it can also die, as well. Nothing lasts forever!

That was a really cute ending, that they got some really happy endings, and there were some unexpected couples, and break ups, and yeah, just a little slice of high school life, kinda reminding me of Over You by Emma McLaughlin and Nicola Kraus with the lead coming up with a company dealing with relationships!

Really fantastic book, and I would really love to read the sequel!