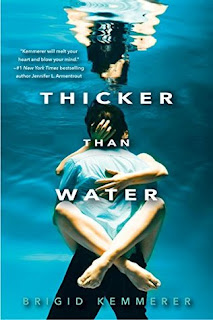 From Goodreads:
On his own
Thomas Bellweather hasn't been in town long. Just long enough for his newlywed mother to be murdered, and for his new stepdad’s cop colleagues to decide Thomas is the primary suspect.

Not that there's any evidence. But before Thomas got to Garretts Mill there had just been one other murder in twenty years.

The only person who believes him is Charlotte Rooker, little sister to three cops and, with her soft hands and sweet curves, straight-up dangerous to Thomas. Her friend was the other murder vic. And she'd like a couple answers…

Answers that could get them both killed, and reveal a truth Thomas would die to keep hidden…

My Review:
I enjoyed reading this book so much! I enjoyed her series, and this book was really fantastic, and I wouldn't mind a sequel, since things were pretty open-ended, and I want to learn more about this world and there's so many places that I'm imagining where it could go!

One quick complaint before I get going, is that the second last paragraph, the "only person who believes him..." because it feels like the book changed from this synopsis being written, and the actual book that I got. The only other murder victim was more of an acquaintance in ballet. Any truths that they find out, they either find out together, or he tells her pretty soon after he finds out.

Onto the good stuff! I really enjoyed the mystery, because it was personal to them, between the fact that the victim was his mother, and it was her brothers that were persistent in trying to arrest him for various things. Plus she was attracted to him, that helped! So awesome mystery!

And then the paranormal aspect. This went hand in hand with the mystery, because yeah, it kinda caused it, but I'm not telling what kind of paranormal! And it's also a bit of why I would love another book, to learn more about how things works, as well as his dad, because he could be a potential bad guy, as well as the truce that was called might not last!

Really awesome book, and I would really love a sequel to this book!