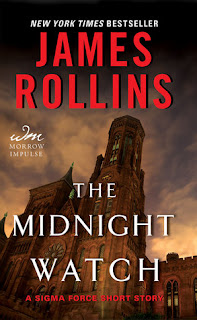 From Goodreads:
From New York Times bestselling author James Rollins comes a lightning-paced short story, in which a major attack on U.S. soil can only be stopped by…The Midnight Watch

In the dead of night, a faceless enemy hacks into the Smithsonian Institution's network of servers, but it is only the first strike masking a larger attack. To rescue a biologist trapped in the National Museum of Natural History and to discover the true intent behind an assault that grows bolder and bloodier by the minute, Sigma Force must unleash its most headstrong operative—Joe Kowalski—to do what he does best: lay waste to anything between him and his goal. From a daring rescue to a cross-city chase like no other, Kowalski will discover the shocking truth hidden in the most unexpected of places: the heart of the National Zoo.

Included with this short story is a sneak peek at The Bone Labyrinth, where events that unfold here explode into one of Sigma Force's greatest adventures of all time.

From Goodreads:
A war is coming, a battle that will stretch from the prehistoric forests of the ancient past to the cutting-edge research labs of today, all to reveal a true mystery buried deep within our DNA, a mystery that will leave readers changed forever . . .

In this groundbreaking masterpiece of ingenuity and intrigue that spans 50,000 years in human history, New York Times bestselling author James Rollins takes us to mankind's next great leap.

But will it mark a new chapter in our development . . . or our extinction?

In the remote mountains of Croatia, an archaeologist makes a strange discovery:  a subterranean Catholic chapel, hidden for centuries, holds the bones of a Neanderthal woman. In the same cavern system, elaborate primitive paintings tell the story of an immense battle between tribes of Neanderthals and monstrous shadowy figures. Who is this mysterious enemy depicted in these ancient drawings and what do the paintings mean?

Before any answers could be made, the investigative team is attacked, while at the same time, a bloody assault is made upon a primate research center outside of Atlanta. How are these events connected? Who is behind these attacks?  The search for the truth will take Commander Gray Pierce of Sigma Force 50,000 years into the past. As he and Sigma trace the evolution of human intelligence to its true source, they will be plunged into a cataclysmic battle for the future of humanity that stretches across the globe . . . and beyond.

With the fate of our future at stake, Sigma embarks on its most harrowing odyssey ever—a breathtaking quest that will take them from ancient tunnels in Ecuador that span the breadth of South America to a millennia-old necropolis holding the bones of our ancestors. Along the way, revelations involving the lost continent of Atlantis will reveal true mysteries tied to mankind's first steps on the moon. In the end, Gray Pierce and his team will face to their greatest threat: an ancient evil, resurrected by modern genetic science, strong enough to bring about the end of man's dominance on this planet.

Only this time, Sigma will falter—and the world we know will change forever.

My Review:
Man, it was so great to read these! We got some Kowalski love, which was really great, as well as the standard fare of James Rollins books of history, science, and location! It's strange, I have this idea that the present is better then the past, and then books like this come around, and we've lost something between then and now!

My dad says that in the books I read, I don't use my mind, that I don't learn anything. Which is totally unfair, because I read books like this, that teach me so much about the world, and in this book in particular, with the question of the moon, which was raised. So ha!

One thing that was brought up, was the intellectual capital, that students from other countries are taught, often with US government money, and then they go back to their home countries to be competition. Which is a good and a bad thing, because competition breeds all sorts of cool things and yet it's being paid for with no immediate benefits. There should be a better system, so everybody has the opportunity to learn and benefit and grow!

Another thing was the treatment and scientific use of gorillas, monkeys, apes. That the US has no restrictions there, that pretty much anything can be done to those creatures. That these creatures are what was chosen for the experiment that the sisters were doing regarding the Great Leap Forward.

I kinda have to disagree with that last sentence of the synopsis! They didn't falter or fail, and if there were any changes to the world, well, they weren't immediate! And that 10 years later epilogue didn't have any spoilers for what was to come, besides the wedding ring, and that just brought up more questions then answers!

Really fantastic stories, really awesome to read, and just great instalments to this series! I can't want for more!