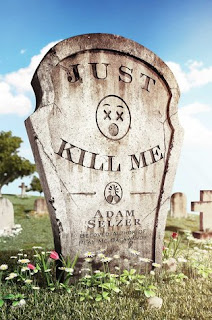 From Goodreads:
From the author of Play Me Backwards and I Kissed a Zombie and I Liked It comes a dark comedy about one teen's unusual summer job as a ghost tour guide in Chicago.

When the last letters in her alphabet cereal are D, I, and E, she doesn't crawl right back into bed. When her online girlfriend won't text a photo, she just sends more of herself.

And when she realizes that Cynthia, her boss at a Chicago ghost tour company, isn't joking about making stops more haunted by killing people there, she doesn't quit her job—she may even help.

But who is responsible for the deaths of prominent figures in the murdermonger industry? Could it be the head of the rival tour company? Or could it be someone near and dear to Megan?

Soon after she learns that she has an uncanny resemblance to a flapper who disappeared in 1922, Megan receives a warning she can't ignore: the next ghost on the tour might be her…

I don't think this book is for everyone. It's a little bit off, from the characters to the plot, like shocking people to death to create a ghost for their tours. But that off-ness is something that adds to this book, so if it's something that you enjoy, well, you'll really like this book!

There was a bit of a mystery to this book. Like who the girl she's communicating with is. Of the deaths of the rivals in the tour business. And the flapper of 1922. They were all separate elements, bu they were all really awesome to wonder about!

Such a wonderful, creepy, amazing book! Really enjoyed it!