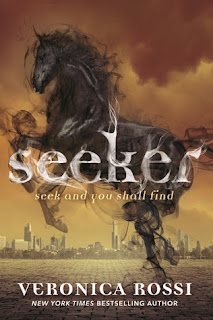 When Daryn claimed she was seeing visions during her sophomore year of high school, no one believed the truth. She wasn't losing her mind, she was gaining the Sight the ability to see the future. If she just paid attention to the visions, they'd provide her with clues and show her how she could help people. Really help them. Daryn embraced her role as a Seeker. The work she did was important. She saved lives.

Sebastian was her first and worst mistake.

Since the moment she inadvertently sealed him in a dark dimension with Samrael the last surviving demon in the Kindred guilt has plagued her. Daryn knows Sebastian is alive and waiting for help. It's up to her to rescue him. But now that she needs the Sight more than ever to guide her, the visions have stopped.

Daryn must rely on her instincts, her intelligence, and on blind faith to lead the riders who are counting on her in search of Sebastian. As they delve into a shadowy realm where nothing is as it seems and where Samrael is steadily amassing power, Daryn faces the ultimate test. Will she have to become evil to destroy evil? The very fate of humankind rests in the answer.

My Review:
Loved reading this book! It was a great sequel to Rider, which I loved! This book was just as good, and I loved being in Daryn's POV. Well, mostly. We did get some of Gideon's POV, which just added so much to this book!

Daryrn feels like she really messed up with Sebastian, and feels guilty for whatever he's going through. So basically, in the beginning of this book, she was punishing herself while trying to find a way to save him. Of course, the guys find her, which is great, because working together is how they need to do things!

The world where Sebastian was trapped, was really interesting! They did have to try multiple times to try to and rescue him, because that place was just weird and different! They had to face their fears and their worst memories, and that was just fascinating to read!

I loved that idea that maybe, just maybe, Samrael could be redeemed. That was a very nice idea and how it was played with, because he showed Daryn a side of him that she connected with. Of course, it was too much to ask! But that he made the choice, even when he knew he could make a better choice, as a satisfying end. That the bad guy choice the not so great ending for himself, that was different and I really enjoyed it!

Absolutely loved reading this book, and I can't wait to read more by Veronica Rossi!