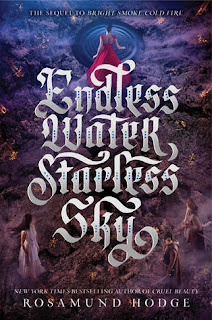 Endless Water, Starless Sky by Rosamund Hodge
Expected Publication: July 24th, 2018
From Goodreads:
In the last days of the world, the walls of Viyara are still falling, and the dead are rising faster than ever.

Juliet is trapped—ordered by Lord Ineo of the Mahyanai to sacrifice the remaining members of her family, the Catresou, to stave off the end of the world. Though they’re certain his plan is useless, Juliet and her former friend Runajo must comply with Lord Ineo’s wishes—unless they can discover a different, darker path to protecting Viyara.

Romeo is tortured: finally aware that his true love is alive, he is at once elated and devastated, for his actions led directly to the destruction of her clan. The only way to redemption is to offer his life to the Catresou to protect and support them . . . even if it means dying to do so.

When Romeo’s and Juliet’s paths converge once again, only a journey into Death will offer answers and the key to saving them all—but is it a journey either of them will survive? 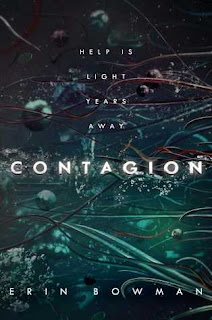 Contagion by Erin Bowman
Expected Publication: July 24th, 2018
From Goodreads:
It got in us

After receiving an urgent SOS from a work detail on a distant planet, a skeleton crew is dispatched to perform a standard search-and-rescue mission.

But when the crew arrives, they find an abandoned site, littered with rotten food, discarded weapons…and dead bodies.

As they try to piece together who—or what—could have decimated an entire operation, they discover that some things are best left buried—and some monsters are only too ready to awaken. 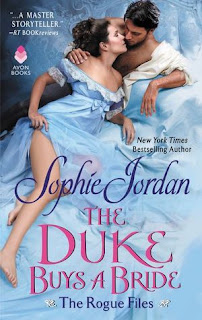 The Duke Buys a Bride by Sophie Jordan
Expected Publication: July 24th, 2018
From Goodreads:
A bride wasn’t in his plans . . .

The last thing Marcus, the Duke of Autenberry, expects to see after sleeping off a night’s drunken shenanigans is a woman being auctioned in the village square. Before he can think about the ramifications, he buys her, thinking he’s winning the girl her freedom. Instead, he discovers he’s bought a wife.

Alyse Bell is almost rid of the shackles that bound her in a name-only marriage, but the day her friend promised to purchase her in a wife auction, he vanishes, leaving her to face a mob of unsavory bachelors intent on owning her body and soul. But the appearance of a wicked, wealthy stranger changes her path forever.

Marcus doesn’t know what to do with the impertinent chit who clearly isn’t duchess material! Insisting their marriage isn’t legitimate, they leave for his estate in Scotland, hoping to devise a plan to get rid of each other. However, on a journey fraught with misadventure, their attraction grows and Marcus realizes he’ll do anything to keep this fiery woman for his own.

Zero Hour by Kate Kessler
Expected Publication: July 24th, 2018
From Goodreads:
As a teenager, Audrey Harte went to jail for murder. Now, she uses her own experiences to help catch dangerous killers. Richard le Duke is the most ruthless serial killer criminal psychologist Audrey Harte has ever encountered. When Richard's son -- and suspected accomplice -- is arrested, police hope they have leverage over Richard to get him to release his latest victim. Instead, they find themselves up against a mind almost as warped as his father's. Matthew le Duke will give up his father's location on one condition: Audrey tell him every gruesome detail of her own dark past. If he doesn't contact his father within the hour, a young woman will die, and her murderer will escape. All Audrey has to do is finally reveal what happened that night -- and how it felt to make her first kill.

Yeah, some really amazing reads! And I've gotten almost all of them as ARC's, so I'm really happy! Such great books! Can't wait for them to come out, because they're so great! What about you guys? Happy reading!
Posted by Louisa @ Words I Write Crazy at 6:00 AM