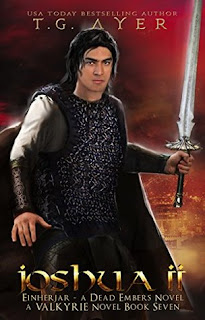 From Goodreads:
Joshua II (Einherjar - A Dead Embers Companion Novel) should only be read after Dead Embers to avoid major spoilers.

For Joshua O'Connell, life in Craven was the picture of small-town perfection.
Until Bryn Halbrook walked into his life.

Though smitten from day one, he knew she was way out of his league.
And then Joshua died.

But that wasn't the end of it.

JOSHUA is a view to what happened off camera during the Valkyrie Series. While Bryn went off on adventure after adventure, Joshua's story continued on its own trajectory.

This novel is best read after reading Dead Embers as it contains spoilers and crossover scenes in which we get Joshua's POV and get a feel for what was going on in his mind and heart.

My Review:
Yeah, more of Joshua and Bryn! And this time, we got to see more than him becoming a Warrior. We got to see him out on missions, and the one that I was most interested in was the final one, where Bryn is kidnapped by the bad guys. It was really great to be able to see what happened while she was held hostage.

There were some really great moments in this book. From when Bryn kinda went beserk on him, to when Odin talked to him and Aimee, to when Aimee leads him through the whole Bryn saw the light on him and thought that meant that she responsible for his death thing. Yeah. That was great to read!

Dead Embers and Dead Chaos were the hardest books in the series for Bryn, what with her wings and all, and while we only got a brief time at the end of this book of Joshua reacting, we'll have plenty more in the next one, which I can't wait for, sadist that I am for book characters!

I do have one complaint. For at least half of this book, Joshua was suspicious, and rightfully so, of Mika. But she wasn't in the first book and I did search multiple times, and we saw their faux introduction both in this book and in Dead Embers and that was after multiple mentions of his distrust. It's not until their Middle East mission that we find out what happened. I wish we could've been shown that, like at the beginning of the book, and not told about it near the middle. It was just this nagging, "what's going on?" thought in my head. Yeah.

This book was awesome, and I can't wait for the next one!