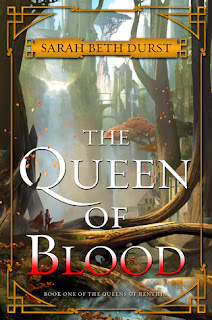 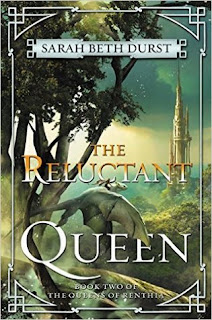 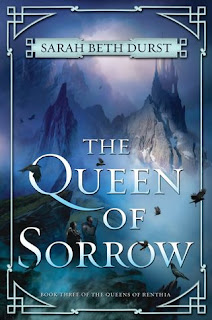 From Goodreads:
An idealistic young student and a banished warrior become allies in a battle to save their realm in this first book of a mesmerizing epic fantasy series, filled with political intrigue, violent magic, malevolent spirits, and thrilling adventure.

Everything has a spirit: the willow tree with leaves that kiss the pond, the stream that feeds the river, the wind that exhales fresh snow . . .

But the spirits that reside within this land want to rid it of all humans. One woman stands between these malevolent spirits and the end of humankind: the queen. She alone has the magical power to prevent the spirits from destroying every man, woman, and child. But queens are still just human, and no matter how strong or good, the threat of danger always looms.

With the position so precarious, young women are chosen to train as heirs. Daleina, a seemingly quiet academy student, is under no illusions as to her claim to the throne, but simply wants to right the wrongs that have befallen the land. Ven, a disgraced champion, has spent his exile secretly fighting against the growing number of spirit attacks. Joining forces, these daring partners embark on a treacherous quest to find the source of the spirits' restlessness—a journey that will test their courage and trust, and force them to stand against both enemies and friends to save their land . . . before it's bathed in blood.

From Goodreads:
Everything has a spirit: the willow tree with leaves that kiss the pond, the stream that feeds the river, the wind that exhales fresh snow . . .
And those spirits want to kill you.
It's the first lesson that every Renthian learns.

Not long ago, Daleina used her strength and skill to survive those spirits and assume the royal throne. Since then, the new queen has kept the peace and protected the humans of her land. But now for all her power, she is hiding a terrible secret: she is dying. And if she leaves the world before a new heir is ready, the spirits that inhabit her beloved realm will run wild, destroying her cities and slaughtering her people.

Naelin is one such person, and she couldn’t be further removed from the Queen—and she wouldn’t have it any other way. Her world is her two children, her husband, and the remote village tucked deep in the forest that is her home, and that's all she needs. But when Ven, the Queens champion, passes through the village, Naelin's ambitious husband proudly tells him of his wife's ability to control spirits—magic that Naelin fervently denies. She knows that if the truth of her abilities is known, it will bring only death and separation from those she loves.

But Ven has a single task: to find the best possible candidate to protect the people of Aratay. He did it once when he discovered Daleina, and he's certain he's done it again. Yet for all his appeals to duty, Naelin is a mother, and she knows her duty is to her children first and foremost. Only as the Queen's power begins to wane and the spirits become emboldened—even as ominous rumors trickle down from the north—does she realize that the best way to keep her son and daughter safe is to risk everything.

Sarah Beth Durst established a place of dark wonder in The Queen of Blood, and now the stakes are even higher as the threat to the Queen and her people grows both from within and beyond the borders of Aratay in this riveting second novel of the Queens of Renthia series.

From Goodreads:
The battle between vicious spirits and strong-willed queens that started in the award-winning The Queen of Blood and continued in the powerful The Reluctant Queen comes to a stunning conclusion in The Queen of Sorrow, the final volume of Sarah Beth Durst's Queens of Renthia trilogy.

Queen Daleina has yearned to bring peace and prosperity to her beloved forest home—a hope that seemed doomed when neighboring forces invaded Aratay. Now, with the powerful Queen Naelin ruling by her side, Daleina believes that her dream of ushering in a new era can be realized, even in a land plagued by malevolent nature spirits who thirst for the end of human life.

And then Naelin's children are kidnapped by spirits.

Nothing is more important to her than her family, and Naelin would rather watch the world burn than see her children harmed. Blaming the defeated Queen Merecot of Semo for the kidnapping, Naelin is ready to start a war—and has the power to do it.

But Merecot has grander plans than a bloody battle with her southern neighbors. Taking the children is merely one step in a plot to change the future of all Renthia, either by ending the threat of spirits once and for all . . . or plunging the world into chaos.

My Review:
I enjoyed reading these books so much! The writing was so expressive, and just drew me into this wonderful, amazing story! Such great reads, and I'm really glad that we're getting a 4th book, to explore more of this amazing world!

We're immediately in this world right from page 1, with the skipping chant and the descriptions of escape from their houses. This world was so rich and so fantastic to read about! And then when you add in these amazing, wonderful characters, who, while they had their flaws, were characters you just had to know what was going to happen to them next!

These books had a lot of suffering in them. From Daleina's village when she was a child, to the events that lead to her being "the Queen of Blood" there was a lot of loss, and a lot of funerals. Which wasn't easy to read, but it deepened these books, and they clearly showed the threat that the spirits poised.

One thing that I really loved, was that Merecot genuinely wanted to get along with Daleina, they were friends in the first book. And when we knew about the threats that she faced-and the big, final plan, it was harder to have bad thoughts about her. Made for a really satisfying ending, though things didn't go quite as planned!

These books were absolutely amazing, I loved reading every single one of them, and I can't wait to explore more of this world in the next book!

The Queen of Blood:

The Queen of Sorrow: