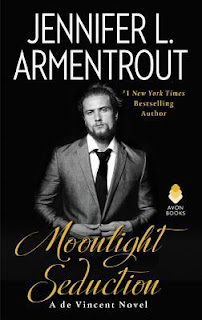 Nicolette Bresson never thought she'd return to the de Vincents' bayou compound. It's where her parents work, where Nikki grew up . . . and where she got her heart broken by Gabriel de Vincent himself. Yet here she is, filling in for her sick mother. Avoiding Gabe should be easy, especially when so much of Nikki's time is spent trying not to be stabbed in the back by the malicious hangers-on who frequent the mansion. But escaping memories of Gabe, much less his smoking-hot presence, is harder than expected—especially since he seems determined to be in Nikki's space as much as possible.

Gabriel spent years beating himself up over his last encounter with Nikki. He'd wanted her then, but for reasons that were bad for both of them. Things have now changed. Gabe sees more than a girl he's known forever; he sees a smart, talented, and heartbreakingly beautiful woman . . . one who's being stalked from the shadows. Now, Gabe will do anything to keep Nikki safe—and to stop the de Vincent curse from striking again.

My Review:
Yeah, I really enjoyed reading this book! I really enjoy reading Jennifer L. Armentrout books, and this series is really good, so it was just the best to read this book! We had the start of a plot line for Gabe in the first book with his son, and yeah, I was glad to get his story, as well as Nikki's!

I really enjoyed Nikki and Gabriel together. They did have a past, which complicated matters, especially since he had his son and that was another complicated situation. They were really good together, and I enjoyed reading about them!

In this book, it's a different kind of personal, in Moonlight Sins, it's who the bad guy is. In this book, it's personal because of what they were doing. Sabrina and her brother did some pretty awful things and she was pretty mean and he was threatening. Poor Nikki!

One thing that was really great, was that we were introduced to the lady who's going to end up with Devlin, Rosie, as a friend of Nikki's, and see their first meeting, which was wasn't as contentious as I think their future meetings will be!

This book was awesome, and I can't wait to read Moonlight Scandals!