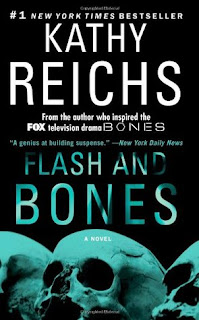 From Goodreads:
FLASH! Illuminated by lightning, a lifeless human hand seems to reach from a barrel of asphalt beside the Charlotte racetrack.

Even for forensic anthropologist Dr Tempe Brennan it is a disturbing sight. And now she must find answers before thousands arrive for the year's big race. But before she can carry out a proper examination, the FBI mysteriously confiscate and destroy the body.

It's a dead end. Until a young engineer alerts Tempe to the disappearance of his sister and her boyfriend from Charlotte twelve years earlier, and she determines to uncover what really happened to them.

Soon after, the engineer's body is found crushed under the wheels of a race car. Tempe realises the situation is truly sinister - and that even her own life could be in terrible danger.

My Review:
I really enjoyed reading this book! I really enjoyed this case revolving around race cars and the big race, not the focus, but so many connections to it! Like the first body being found near by the track. Or how the possible victim's wanted to and was skilled at being a driver and that her brother now worked for a driver. Yeah. Lots of connections!

The whole thing with the FBI barging in on their case like that, it was very annoying. And then when the body was destroyed, that was a big mess up. And that was pretty darned infuriating! Sure, there probably wasn't anything more information that they could get from the body, but it was still a bit mistake!

I loved how she got dragged into Pete and Summer's wedding planning drama. How she said something which Summer misinterpreted and wrecked things further and then said that Tempe should help fix it. It was pretty hilarious! And it did save her, if not from death, from being more thoroughly knocked out, which is good!

The reasoning behind the bad guy's motivations? Yeah, that just made me angry, because like Tempe said, women had been driving since before he was born, and either he didn't know or he didn't care, and either way, it doesn't say anything good about his character, before the whole murderer thing!

Yeah, this book was awesome, and I can't wait to read more!