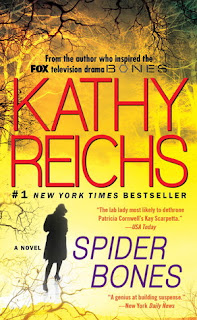 From Goodreads:
John Lowery was declared dead in 1968—the victim of a Huey crash in Vietnam, his body buried long ago in North Carolina. Four decades later, Temperance Brennan is called to the scene of a drowning in Hemmingford, Quebec. The victim appears to have died while in the midst of a bizarre sexual practice. The corpse is later identified as John Lowery. But how could Lowery have died twice, and how did an American soldier end up in Canada?

My Review:
I really enjoyed this book! It was different from the other books in that we got to go to Hawaii for a working vacation and work with the JPAC on this baffling case of multiple bodies identifying in different ways as the same guy! And we also got to see Lily and Katy interact, which was pretty hilarious!

This book had a lot going on. There's the case of "who's who" with 3 different bodies that were thought to be Lowery, to the guy that Katy was seeing was killed just as he was coming home. And Lily having trouble with her sobriety, so a change of location as well as a vacation sounded good. Oh, and some bodies turning up having been chewed on by sharks. Fun times!

I kinda guessed that the cousin was why there were so many bodies that were identified as Lowery, because of the whole, they looked alike thing. And I was right, but I didn't know how complicated it would be, and yeah, that was really great!

One thing that I wished for, was that we could've explored more of Tempe's past working with JPAC. More specifically, why she left. I'm pretty sure it's because she started going between Carolina and Montreal and the workload got to be too much, but I can't be certain, because it wasn't stated!

This book was fantastic, and I enjoyed reading it so much! Yeah for different!