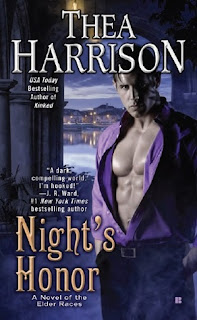 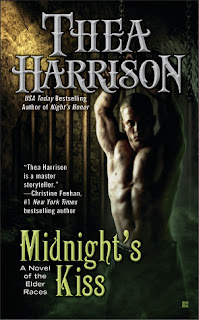 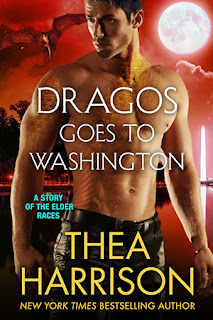 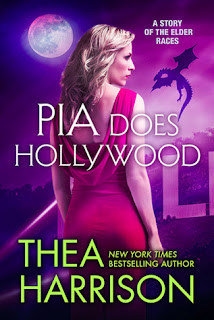 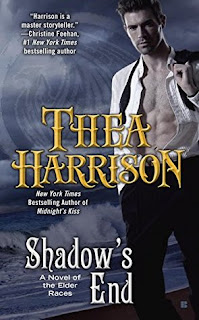 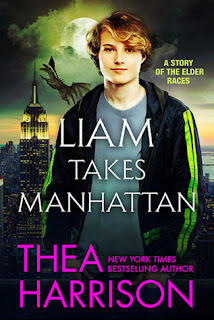 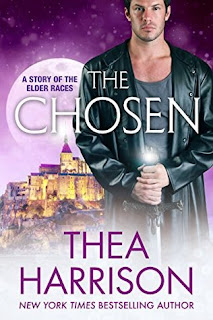 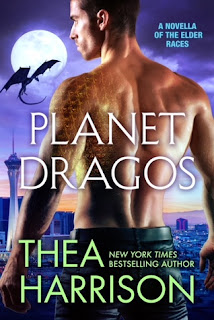 From Goodreads:
In the latest Novel of the Elder Races, a woman finds herself in need of protection-and seduced by honour . . .

On the run from her former employer, Tess knows that she's vulnerable on her own amongst the Elder Races. That's why she decides to audition to become the human attendant of a powerful Vampyre of the Nightkind demesne. But while her position affords her the safety she seeks, her protector turns out to be more than she bargained for.

The right-hand man of the Nightkind King, Xavier del Torro is both terrifying and alluring. While his true nature frightens Tess, she can't ignore the appeal of his innate sense of integrity and self-restraint. Thrown into Xavier's world, Tess must quickly learn to navigate the dangers-both to her life, and to her heart. But the biggest threat comes from her own past . . .

From Goodreads:
In the latest Novel of the Elder Races, two souls who have long buried their passions are about to be consumed…

Ever since their scorching affair ended years ago, Julian, the Nightkind King, and Melisande, daughter of the Light Fae Queen, have tried to put the past behind them—and distance between them. But when a war breaks out between Julian and Justine, a powerful Vampyre of the Nightkind council, they find themselves thrown together under treacherous circumstances…


Kidnapped as leverage against Julian, Melly is convinced that her former lover won't be rushing to her rescue. But when Julian gives himself up to save her, they both end up Justine's captives. Armed only with their wits and their anger, Melly and Julian must work together to escape. But will they be able to ignore their complicated history, or will the fiery passion that once burned them blaze again?

From Goodreads:
Dragos Cuelebre, Lord of the Wyr, needs to throw a party without maiming anyone. That isn't exactly as easy as it might sound.

After the destructive events of the last eighteen months, the Elder Races are heading to Washington D.C. to foster peace with humankind. Not known for his diplomacy skills, Dragos must rely on his mate Pia to help navigate a battlefield of words and polite smiles rather than claws. With Dragos's mating instinct riding close to the surface, his temper is more volatile than ever and the threat of violence hovers in the air.

Then the human spouse of a prominent politician winds up murdered and Dragos and Pia must race against time to hunt down those behind it before they are held responsible for the crime.

For fans of DRAGON BOUND and LORD'S FALL, the latest novella in the Elder Races holds passion, peril, political intrigue, and revelations that will change Dragos and Pia's lives forever.

From Goodreads:
After making a diplomatic pact with humankind and the other leaders of the Elder Races, Pia Cuelebre, mate to Dragos Cuelebre, Lord of the Wyr, reluctantly heads to Hollywood to spend a week with the Light Fae Queen, Tatiana, before the busy Masque season hits New York in December.

Dragos has never let the lack of an invitation stop him from doing anything he wanted. Unwilling to let his mate make the trip without him, he travels to southern California in secret to be with her.

But when an ancient enemy launches a shattering assault against the Light Fae, Dragos and Pia must intercede. The destruction threatens to spread and strike a mortal blow against all of the magically gifted, both human and Elder Race alike.


Working with the Light Fae to neutralize the danger, Dragos and Pia find their deepest vulnerabilities challenged and their most closely held secrets threatened with exposure.

From Goodreads:
The author of Lord's Fall and Midnight's Kiss returns with an enchanting and sizzling new tale about debts that cannot be repaid and hunger that cannot be satisfied…

For Beluviel, consort to the Elven High Lord, and Graydon, gryphon and First Sentinel of the Wyr, even the slightest desire for each other is forbidden. But two hundred years ago, after a desperate play to save Beluviel's stepson left them indebted to the cruel Djinn Malphas, they found their fates inexorably linked together—and the hunger between them growing too strong to ignore…


Two centuries later, with their debt to Malphas coming due, Beluviel and Graydon realize that, if they are to stand any chance of saving their souls, they must once again work together—this time more closely than ever before. But every moment they spend with each other brings them nearer to losing something even more vital—their hearts…

From Goodreads:
Reeling from a deep loss, the magical prince of the Wyr, Dragos and Pia's son Liam Cuelebre, turns inward and withdrawn as he struggles to come to terms with who he is, along with the challenges that lie before him.


Hoping to ease his heartache and offer comfort, a concerned Dragos and Pia offer him a gift, something he has desired for a long time. Liam's response has a ripple effect across all of New York. Soon miracles of all kinds start arriving just in time for Christmas, along with a visit from a mysterious person who gives Liam hope and a vision of his future.

From Goodreads:
Short-Story from May 2016 newsletter.

From Goodreads:
A Wolf on the hunt...
Wulfgar Hahn, better known as the Wolf of Braugne, is a man on a mission. Determined to avenge the murder of his brother, he stops at Camaeline Abbey to meet with the Chosen of Camael, goddess of the Hearth. Unfortunately, it appears the Chosen wants nothing to do with him.

A leader in disguise...
Captivated by the Wolf of Braugne despite herself, Lily poses as an unassuming priestess in order to learn more about this ruthless man. But things are not as they seem, and after foiling an assassination attempt, Lily must decide if Wulf is the destroyer from her visions, or the hero of her dreams.

As war looms on the horizon, passion sparks between them, but an enduring relationship between a soldier on the march and a leader who reveres hearth and home is impossible—or is it? Among the swirling snows of the winter Masque, the gods and goddesses of the Elder Races dance, and love will find a way..

From Goodreads:
Pia's latest pregnancy has become a daily challenge, her relationship with Dragos strained with argument. That hasn't stopped them from achieving a compromise and traveling to Las Vegas to celebrate their friend Rune's wedding to his mate Carling.

From the moment they arrive, the trip goes awry. Death walks in Vegas, and Pia is kidnapped as an ancient enemy makes a move to destroy the Great Beast once and for all.

But the Great Beast has other plans.


On Planet Dragos everything goes the way he arranges it—unless someone decides to cross him, and God help them then, because he doesn't know how to back down, and he doesn't ever, ever let up….

My Review:
Yeah to reading the rest of this series! I again devoured these books, because yeah, they are just that freaking good! And that enjoyable! We got to see old favourites, and meet some new ones! Just making this series all the better!

It seems like each book, we focused on a demesne with the characters, like vampires in Night's Honor. But what happens in one book impacts the everybody, as evidenced in Dragos Goes to Washington, so I really enjoyed all of that! Everybody coming together, was was so great!

In Shadow's End, honestly, all I wanted to do was skip the historical part, because it was leading them to trouble, and that was kinda pushing my buttons, but it was why they were in the space they were in the beginning of the book. But it was the last full length novel in the series, so yeah, going back worked well!

Events have been building up for a while. I didn't realize that the guy briefly mentioned in Devil's Gate was the same on in Night's Honor, but he's also important in Shadow's End, because yeah, he's a total bad guy! It was at a great cost, but they won,  and they were free, so that was great!

Yeah, I loved this series, it was just so great, and I can't wait to read more of her books!