Week 2 Reviews: Aren't You Glad You Didn't Turn On the Lights?, Moonlight and Sunscreen, Black Wings, Night Out, A Good Bargain, Black Night 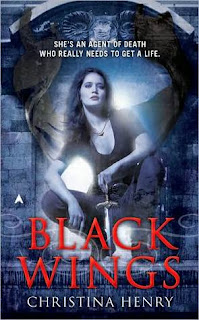 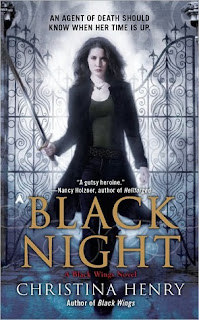 From Goodreads:
Short Story written by the author Christina Henry in 2011 on her website.


This story takes place before the events of BLACK WINGS.

From Goodreads:
Short Story released in 2011 on author's website: www.christinahenry.net

From Goodreads:
She's an Agent of Death who really needs to get a life.

As an Agent of Death, Madeline Black is responsible for escorting the souls of the dearly departed to the afterlife. It's a 24/7 job with a lousy benefits package.

Maddy's position may come with magical powers and an impressive wingspan, but it doesn't pay the bills. And then there are her infuriating boss, tenant woes, and a cranky, popcorn-loving gargoyle to contend with.

Things start looking up, though, when tall, dark, and handsome Gabriel Angeloscuro agrees to rent the empty apartment in Maddy's building. It's probably just a coincidence that as soon as he moves in demons appear on the front lawn. But when an unholy monster is unleashed upon the streets of Chicago, Maddy discovers powers she never knew she possessed. Powers linked to a family legacy of tarnished halos.

Powers that place her directly between the light of Heaven and the fires of Hell...

From Goodreads:
Madeline Black is an Agent of death, meaning she escorts the souls of people who have died to the afterlife. Of course, not everyone is happy to see her...

If obstinate dead people were all that Maddy had to worry about, life would be much easier. But the best-laid plans of Agents and fallen angels often go awry. Deaths are occurring contrary to the natural order, Maddy's being stalked by foes inside and outside of her family, and her two loves-her bodyguard, Gabriel, and her doughnut-loving gargoyle, Beezle-have disappeared. But because Maddy is Lucifer's granddaughter, things are expected of her, things like delicate diplomatic missions to other realms.

My first review of Black Wings, Black Night
My Review:
I really enjoyed starting this series over again! I remembered that I really enjoyed it the first time, and that was about it. I loved watching Maddy enter this world of angels and other supernatural creatures. Sure, she's a Agent of Death with Beezle, but it isn't until things start happening does she discover the other side of her heritage. Well, actually, being an Angel of Death also gives her a connection, but she didn't know that in the beginning!

I really enjoyed all of these characters. Maddy who gets drawn into this complex political structure and doesn't want anything to do with it. Gabriel, who she isn't supposed to care about. Beezle, with his banter with Maddy and his extensive supernatural knowledge.

Maddy seems to have one main strategy, one given to her by Beezle, which I think he kinda regretted-that everything seems to dislike fire. Because she uses it over and over, and it does work, but it causes a lot of collateral damage. It is fire after all!

There's still the question of who made the portal, and I hope we find out, because yeah, it's a little itch in my brain that I'd like to have scratched, otherwise it'll keep bugging me! Just another reason to continue to read this awesome series!

Loved these books so much, and I can't wait to read more!

Aren't You Glad You Didn't Turn On the Lights?: