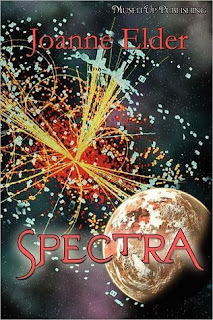 From Goodreads:
Light years away from Earth a mining exploration crew makes an amazing discovery...intelligent life comprised entirely of energy. This living energy is so pure and unique, it could provide proof of the existence of the human soul. Those exposed to the entities gain unimaginable cognitive abilities but at a terrible cost.A rogue scientific group will do anything to maintain their mind-enhancing gifts, even if it leads to the destruction of the peaceful beings. Only two people stand in their way, and they will sacrifice everything to end the slaughter. Could the quest for the secrets of life lead to the creation of true evil; one so dark it threatens to tear down the walls of sanity and redefine our very existence?

My Review:
Well, this was a fantastic book. The characters had a fight that was hard to overcome, the bad guys had all the cards, and only luck and smarts helped them fight back. You just had to root for them, from Dean losing his ex-wife, and having to take the blame, and having to face his best friend-his ex-wife's brother-and have said friend want to kill you, well, you just wanted to throttle the bad guys!

The entities were really amazing, that they could do what they did, but it came at a cost of their lives, so what the bad guys did, and the blasting them, well, it was inhuman, that they would do that. Combined with the science of what life might have evolved from, well, it was very interesting, and excellent to read!

The characters, having to face what the bad guys were throwing at them, just because the bad guys wanted power and more power, well, it was heartbreaking to read, and argh, I just wish that I could've hurt them! Dean did not deserve to have that done to him, from the frame job, to the whole way they tried to kill him, with the bugs...that was horrible. But he outsmarted them, and good for him! Loved that!

Romance-wise, it was very sweet, and developed very quickly, after all, going through what they did, it's kinda like a regular couple in a normal situation having 50 dates or so. And they were really good together, and deserved each other after all they went through. And at least they're going to a bit of happiness before the next book!

This was an excellent book, and I can't wait to read the next one!