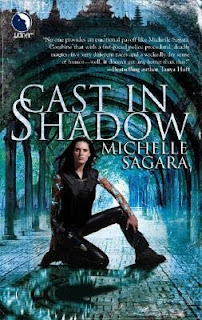 My Review:
I don't know why I took so long to read this book! It was freaking amazing, I absolutely loved it, and I know I've found another favourite author, because yeah, this was just fantastic! I mean, there were such great characters, and a full fleshed world, if we didn't see all of it.

I loved all the different species that this book had, that Kaylin had meet all but 1 or 2 of the races, that they each had their own language, and from the Immortal Dragons and Barrani, to the mortal Humans, Aerians, Leotines, and others.

Oh, and the betting that Kaylin introduced, and how they would bet on whether she was late or not, and that most of the time she was, because she had a late birthing to attend, to try and heal the mother or child, or both, to try and make sure that they survived. Because Kaylin wanted to make up for her past, a past that we slowly learn about.

And with that past, is Severn, a complex guy, who is tangled up in her past, and then is now in her present, and yeah, she tries to kill him twice, but not really, because if she'd really tried, he'd be dead, and he isn't, because he's mentioned in subsequent books.

There were such great characters in this book, Kaylin Severn, Tiamaris, Teela, Tain, the Hawklord, Marin, that had depth, and that may or may not be in future books, but I hope so, because they were just awesome and amazing, and I want to know more about them, and this world, so I must read more!!!

This was just a spectacular book, don't know why it took me so long to read it, but I have, now to read more!!!