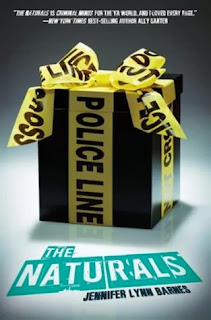 My Review:
Gah, I just absolutely loved this book! I love all Jennifer Lynn Barnes books, but man, this one just took the cake! So enjoyable, so entertaining, and just so great! A collection of teens with gifts that they're utilizing to solve crimes? Awesome!

One of the best parts of this book, were these characters. I wanted to know more about them, Cassie, who while her father's family means well, they don't understand her. Dean, who has the same gift as Cassie, but keeps to himself. Michael, the rich kid who presents a mask to the world. Sloane, the socially inept but master at numbers, and Lia, the girl you can't lie to, but loves to lie to you. And their two adult handlers, and then the guy that oversees them at the house. Yeah. Such great, awesome characters!

I am so glad that this is a series, because I just want to spend more time with these characters, learn more about them, to know if she'll fall in love with Michael, Dean, or both in different ways, and having to chose one of them, which looks like that's the way that it's going!

The mystery is personal for Cassie, because the murderer is bringing up memories of her mom, and then one scene is exactly how her mom disappeared. And was possibly killed. Yeah. And that twist at the end? Of how the bad guy was? That was unexpected, and it hurt, but it was awesome! Such a great twist!

I enjoyed this book so much, and yeah, I really can't wait for more! This was a really fantastic book!