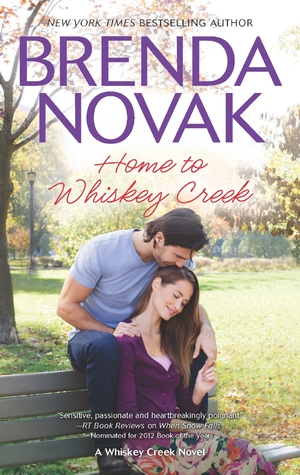 From Goodreads:
Sometimes home is the refuge you need-and sometimes it isn't.  Adelaide Davies, who's been living in Sacramento, returns to Whiskey Creek, the place she once called home. She's there to take care of her aging grandmother and to help with Gran's restaurant, Just Like Mom's. But Adelaide isn't happy to be back. There are too many people here she'd rather avoid, people who were involved in that terrible June night fifteen years ago.

Ever since the graduation party that changed her life, she's wanted to go to the police and make sure the boys responsible-men now-are punished. But she can't, not without revealing an even darker secret. So it's better to pretend....

Noah Rackham, popular, attractive, successful, is shocked when Adelaide won't have anything to do with him. He has no idea that his very presence reminds her of something she'd rather forget. He only knows that he's finally met a woman he could love.

My Review:
This was a really fantastic book! These are pretty much new characters, characters that aren't/weren't part of the gang that the first three books characters were a part of. But Adelaide is the granddaughter of the one that owns the restaurant that the gang meets up, so yeah!

I really enjoyed their story, though it was sometimes hard to read. Adelaide had that secret in the past, and we knew it was something dark and violent, and as it was slowly revealed, yeah, it just proves that just because you live in a small town, doesn't mean that everyone that lives there is good!

One little nit pick that I have is, that in the book, it's mentioned that Adelaide is a blonde. Yet the model on the cover, is a brunette. That seems like a weird different to have, since they could've chosen a different model or something. But yeah.

I really hope that there's more then 5 books in this series. There are too many people in this town that need some happy endings still! Like Baxter! Oh, poor Baxter had a rough run of it in this book! But I hope for good things for him!

This was a really great, enjoyable book, and yeah, I can't wait for more!