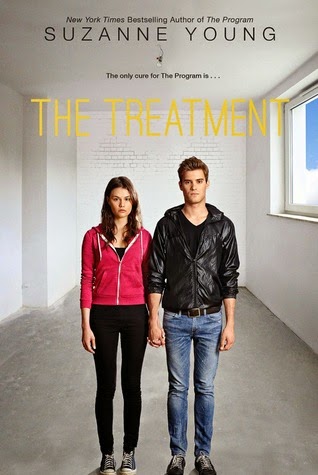 From Goodreads:
Can Sloane and James survive the lies and secrets surrounding them, or will The Program claim them in the end? Find out in this sequel to The Program, which Publishers Weekly called "chilling and suspenseful."

How do you stop an epidemic?

Sloane and James are on the run after barely surviving the suicide epidemic and The Program. But they're not out of danger. Huge pieces of their memories are still missing, and although Sloane and James have found their way back to each other, The Program isn't ready to let them go.

Escaping with a group of troubled rebels, Sloane and James will have to figure out who they can trust, and how to take down The Program. But for as far as they've come, there's still a lot Sloane and James can't remember. The key to unlocking their past lies with the Treatment—a pill that can bring back forgotten memories, but at a high cost. And there's only one dose.

Ultimately when the stakes are at their highest, can Sloane and James survive the many lies and secrets surrounding them, or will The Program claim them in the end?

My Review:
This was a fantastic book! Because someone flat out says that The Program is creating more pressure in teens, making the epidemic worse. And The Program knew that, but covered it up. And yeah, that was something that Sloane pretty much knew, but this was telling the whole world!

So Sloane and  James are the run, and they get picked up by the rebellion quite quickly, and yeah, in the end, that's a mixed bag, considering the rebellion kept them from being captured-until one of their own told The Program where they were in a deal for The Treatment!

I enjoyed that it was James that took it, because while Sloane was around longer, and he went to the Program earlier, she had decided that she was living her new life, and the memories of her old one would just be damaging And on the plus side, James had plenty more to focus on then his memories after taking the treatment, so he was OK there!

So this book took our favourite characters, introduced a few more, and left most of them in a good place, a fraction of the leftovers in a bad one, and then a few others that we're going to get more story in, in the novella set afterwards! And I liked the endings, even the sad ones, because they were fighting a private, but government-funded and sanctioned group, so there was bound to be losses.

Favourite lines: "Are you kidding? I'll kiss you right now if you have coffee. And, baby, if you have a cheeseburger, I'll get down on one knee." Aw, love their teasing! "We're f**king mental for each other-but maybe that's how we survive from here. We just have to be crazier than The Program." Yes, you need to beat the program! "Sure thing, Casanova. And if your man bits lose their ability to reproduce, I hope there are no hard feelings." Take that, Cas!

I enjoyed this book so much, and yeah, I'm so glad for the Realm novella after this, and the prequel duology that's going to be coming-more time spent in this world!

Author: Suzanne Young
Series: The Program #2
Read: November 2nd, 2014
Source: Publisher for Review
Reason Why: Really enjoyed The Program, got this as an ARC, and it's a 2014 Dystopia Book, Prequel & Sequel Challenge 2014 Book and a WoW Book!
Publisher: Simon Pulse
Published: April 29th 2014