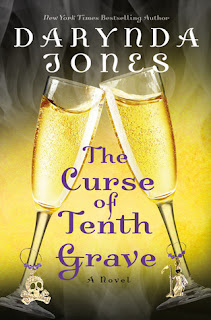 From Goodreads:
As a Part-time PI and fulltime grim reaper, Charley Davidson has asked a lot of questions throughout her life: Why can I see dead people? Who is the hot supernatural entity following me? How do I get gum out of my sister’s hair before she wakes up? But, "How do I trap not one malevolent god, but three?" was never among them. Until now. And since those gods are on earth to kill her daughter, she has little choice but to track them down, trap them, and cast them from this dimension.

There's just one problem. One of the three stole her heart a very long time ago. Can the Razer, a god of absolute death and destruction, change his omniscient spots, or will his allegiances lie with his brothers?

Those are just a few of the questions Charley must answer, and quick. Add to that a homeless girl running for her life, an innocent man who's been charged with murder, and a pendant made from god glass that has the entire supernatural world in an uproar, and Charley has her hands full. If she can manage to take care of the whole world-destroying-gods thing, we're saved. If not, well…

My Review:
Absolutely loved reading this book! After Dirt turned things on its head, it was great to go back to how things used to be, but with Beep hidden away, new knowledge, and with the stakes higher! So we got a change, and so now refreshed to really get back into the action!

There was the big reveal that Reyes was made from Razer, one of the brothers of Uzan. The most violent one. Except that things aren't always what they seem, and new information comes to light, because this is Reyes we're talking about here! And this series-there is always more then meets the eye! So many revelations, that just take this series higher, and make things more complicated!

There were a few cases in this book. Wrapping up a potential cheating husband. A girl from a group home where the kids are cursed to die, and she was next. And the big one, a lady was murdered and the police arrested the boyfriend. But again, this series, the hidden depths!

What with the ending of Dirt, things were different between Reyes and Charley. And neither of them liked it, but they didn't know how to deal with it. So Cookie to the rescue! And the secrets! And how those came into play! And then that ending, oh! That was a big challenge! Can you see how hard I'm trying not to spoil?

Loved all the revelations in this book, and I just can't wait for the next book, because that ending was a huge cliffhanger!