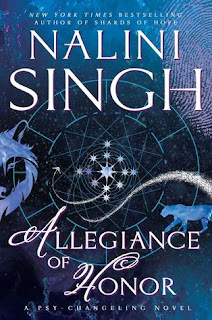 The Psy-Changeling world has undergone a staggering transformation and now stands at a crossroads. The Trinity Accord promises a new era of cooperation between disparate races and groups. It is a beacon of hope held together by many hands: Old enemies. New allies. Wary loners.

But a century of distrust and suspicion can't be so easily forgotten and threatens to shatter Trinity from within at any moment. As rival members vie for dominance, chaos and evil gather in the shadows and a kidnapped woman's cry for help washes up in San Francisco, while the Consortium turns its murderous gaze toward a child who is the embodiment of change, of love, of piercing hope: A child who is both Psy…and changeling.

To find the lost, protect the vulnerable—and save Trinity—no one can stand alone. This is a time of loyalty across divisions, of bonds woven into the heart and the soul, of heroes known and unknown standing back to back and holding the line. But is an allegiance of honor even possible with traitors lurking in their midst?

My Review:
Oh, oh, oh! I only just started reading this series, but I devoured it. And to have this book come out so soon after all that, was really great, to keep in mind all the things that were going on in in this world, with these characters! After 14 previous books, that was a lot!

In my mind, I was comparing this book to Dark Celebration by Christine Feehan, because they both catch up with the couples that we've gotten to know previously. This book was fluid, and didn't catch up with everybody, but there were developments in this world, so yeah, that was really great!

So much happened in this book. Like Naya's first shift. That was so cute and sweet! And the problems with Trinity being created so quickly-not knowing what sides people are on, and not having any kind of ruling body or rules really. Yeah. Oh, and Hawke implementing a plan to take down Ming by taking away his money and power, before going to kill him. And that it's a group effort!

It was sad with Zie Zen passed. But he left once the world was better, that he'd done what he and Sunny had wanted to have done. It was sad, but it was his time. I want to know more about Clara Alvarez, head of Haven where Samuel Rain is currently! After all, she's part of the solution in healing the PsyNet!

Then there was the architect of the Consortium, we got his POV in a few sections, and it was a mystery who he/she was. The way the thoughts were, I was thinking maybe it was Ming, or Pax Mitchell-what with his possible attempt at kidnapping Naya, whether it was him or if it was set up like he did it, since both of them are not the good guys, or it could be another character that we know, or an unknown! And I can't wait to find out!

Some of the main things going on in this book was the attempted kidnapping of Naya. That the Psy net was still dying, but more slowly now. And the disappearances of BlackSea members, specifically Leila Savea. This lead to things like learning a bit about Ps-Psy, finally-Faith's brother, Tanique, who I really hope gets a book, and soon!

In this book, the in-between stuff, was Zavier's letters to Nina. They showed him and his past, and his history with meeting Jude, and then Kaleb, and how he met the two of them. And since this story took place while Zavier was looking for Nina, well, yeah. that was great! So sweet, and I was so happy for the two of them!

The pupcubs were born! Loved how Mercy, Riley, Tamsyn and Lara tricked everyone into betting on quads when it was triplets-Isabelle first, a leopard, and her brothers Acton and Michael, wolves. Which is a pretty good show of the dominance between Mercy and Riley!

Another thing that was just so freaking sweet, is that Kaleb was the one that saved Annie from the bullet train. So her son is named Rowan Kaleb Quinn. And that was just freaking adorable, and I loved it so much!

Loved where the book left off, everything that happened, and yeah, I can't wait for the Wild Embrace, and then the next full length novel in this series!