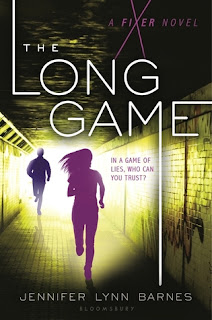 My Review:
I just loved reading this book! I was meaning to read it in another two weeks, or that so the review would post on the 2nd. But I got this book, and I just couldn't help myself, I had to read it! I was just sucked in and just devoured it!

Where things left off in the first book, she was suspecting her grandfather as the 4th member of the whole conspiracy.  This book doesn't end with that thought-because she found out who actually was the 4th member.

There was a lot going on. There was the president's son coming in with his girlfriend being a terrorist-and that she'd been with him because of who he was. And that she became pregnant? Oh, and that he wasn't the president's son, but her grandfathers. Which means that the baby is Tess's cousin. Yeah.

There was the presidential campaigns-those of the students and those of the government. And how those were all derailed by the president of the United States being shot. Oh, and a student being killed and Tess finding him while he was dying. And the whole terrorists taking over the school thing. That was pretty violent! And Henry, oh! That hurt!

So many twists and turns and revelations, and yeah, I need a 3rd book, I need more of these characters!