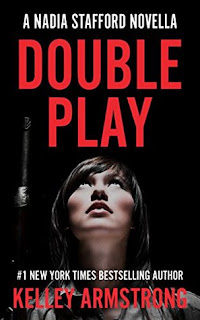 From Goodreads:
Life is good for lodge owner and sometime hitwoman Nadia Stafford — a couple of dogs, a job she takes satisfaction in and the man she loves at her side as they literally build a home together. It's as close to normal as a pair of contract killers can get.

Jack knows that sometimes being very, very good at what you do can be very, very bad — for those around him. He's gone to great lengths to keep his past from catching up with Nadia. He also knows it's only a matter of time …

Jack is halfway around the world when the trap is triggered. They're coming for Nadia. And he has no way to warn her.

Of course, it wouldn't be a Nadia Stanford book without complicated twists, dead bodies, and Nadia and Jack. Those, for me, are the main elements, in different ways. Just because this is a novella, doesn't mean that it isn't packed!

We learned more about Jack's past, and his beginnings as a hitman, as well as his family's deaths. I don't remember how much we knew about them before, but there were at least a few new details, like he was getting cigarettes when the remaining members of his family were killed.

Taken all together, the plot was overly-complicated, and filled with hidden layers. Kidnap Quinn, to lure out Nadia, kidnap her so to get Jack to do a job for them. Most likely a high-value political target. And then there's the stuff with Jack's first mentor, and the cartel, and Contrapasso! Yeah!

Loved this story so, so much, and I really hope that there's enough reader interest so to hopefully get more stories, maybe even another full length novel or something! That'd be wonderful-I would love more Nadia and Jack!