Week 26 Review: Bite Me If You Can 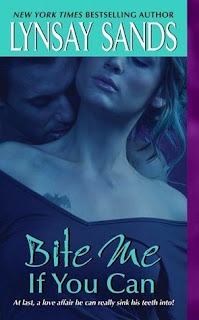 One minute Leigh is walking home in the early hours of the morning, and the next a vampire is sinking his teeth into her neck. Turns out it was a rogue vampire marked for termination, but it does Leigh little good because the damage's already been done. She's become one of them.

Lucian Argeneau, hunter of rogue vampires, has been alive for over two thousand years, and there's very little to excite him anymore. Food has become tasteless, sex is ordinary. Then Leigh drops into his life. Suddenly he finds himself craving coffee . . . and imagining the sassy brunette atop the black satin sheets on his nice big bed. It's Lucian's job now to enlighten Leigh on the inner workings of being immortal . . . and tutoring her is igniting a fire in him that hasn't burned in centuries.

But until they stop a renegade bloodsucker from destroying the human race, passion will have to wait!

My Review:
This book was utterly hilarious! Things just didn't seem to go right for Lucien, one thing after the other, which reminded me of Bastien from Tall, Dark and Hungry! Just so much went wrong, from little things to big things and it was just so great to read!

Lucian has been in the previous books, though mostly just popping up a bit, like at the wedding and threatening Greg. He's the uncle of all the previous Argeneau stars, the twin brother of Jean-Claude. So yeah, it was really great to read his story!

I really enjoyed him and Leigh, they were from different times, and he's gone through a lot of loss, and she's had a hard past. But they fit together, and it was just so freaking great to read this story! It was so great to watch them fall in love!

The bad guy of Morgan, and that he was Jean-Claude's friend, yeah, that was not a good situation! But they did win in the end, and that is almost all that counts. And the remainder of the count, did well, too, so yeah, that was great!

This book was just so freaking enjoyable, loved reading it, and I need to read more of this series!