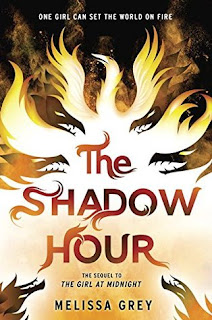 The Shadow Hour by Melissa Grey
Expected Publication: July 12th, 2016
From Goodreads:
Everything in Echo's life changed in a blinding flash when she learned the startling truth: she is the firebird, the creature of light that is said to bring peace.

The firebird has come into the world, but it has not come alone. Every action has an equal and opposite reaction, and Echo can feel a great and terrible darkness rising in the distance. Cosmic forces threaten to tear the world apart.

Echo has already lost her home, her family, and her boyfriend. Now, as the firebird, her path is filled with even greater dangers than the ones she's already overcome.

She knows the Dragon Prince will not fall without a fight.

Echo must decide: can she wield the power of her true nature--or will it prove too strong for her, and burn what's left of her world to the ground?

Welcome to the shadow hour. 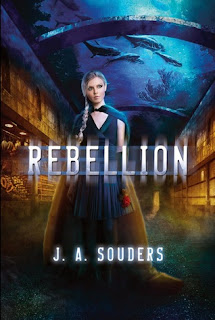 In this conclusion to J. A. Souders’s thrilling, twist-filled Elysium Chronicles series, Evie Winters and Gavin Hunter return to the isolated, dangerous underwater city that they fought so hard to escape.

Back in Elysium at last, Evie has finally found her true self hidden under layers and layers of false memories implanted by the woman she knew as Mother. Thanks to the intervention of her father, she knows the horrible truth about Mother and her insidious plans for her city. With the help of the love of her life, Gavin, and her best friend, Asher St. James, she’s determined to free her people from the cruel dictatorship of Mother’s laws. But how do you free people who don’t know they need rescuing?

Working with the growing Underground rebellion, Evie tries to remove Mother from her position by force—with disastrous results. As the body count rises, Evie must find a way to save Elysium before Mother destroys them all. 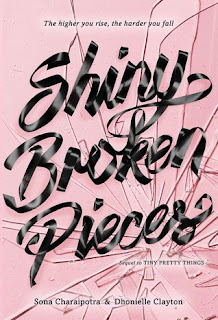 Shiny Broken Pieces by Sona Charaipotra & Dhonielle Clayton
Expected Publication: July 12th, 2016
From Goodreads:
June, Bette, and Gigi have given their all to dance at Manhattan’s most elite ballet school. Now they are competing one final time for a spot at the prestigious American Ballet Company. With the stakes higher than ever, these girls have everything to lose…and no one is playing nice.

June is starting to finally see herself as a prima ballerina. However, getting what she wants might cost her everything—including the only boy she’s ever loved. Legacy dancer Bette is determined to clear her name after she was suspended and accused of hurting her rival, Gigi. Even if she returns, though, will she ever regain the spotlight she craves? And Gigi is not going to let Bette—or the other dancers who bullied her—go unpunished. But as revenge consumes her, Gigi may be the one who pays the price.

After years of grueling auditions, torn ribbons, and broken hearts, it all comes down to this last dance. Who will make the cut? And who will lose her dream forever?

Yeah, some really great books coming out! I just want to read them so much! What about you guys? Happy reading!
Posted by Louisa @ Words I Write Crazy at 6:00 AM