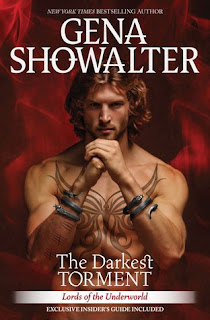 From Goodreads:
New York Times bestselling author Gena Showalter returns with her most explosive Lords of the Underworld tale to date, about a fierce warrior on the brink of sanity who will stop at nothing to claim the exquisite human with the power to soothe the beast inside him…

Driven to his death by the demon of Distrust, Baden spent centuries in purgatory. Now he's back, but at what cost? Bound to the king of the underworld, an even darker force, he's unable to withstand the touch of another…and he's quickly devolving into a heartless assassin with an uncontrollable temper. Things only get worse when a mission goes awry and he finds himself saddled with a bride—just not his own.

Famed dog trainer Katarina Joelle is forced to marry a monster to protect her loved ones. When she's taken hostage by the ruthless, beautiful Baden immediately after the ceremony, she's plunged into a war between two evils—with a protector more dangerous than the monsters he hunts. They are meant to be enemies, but neither can resist the passion burning between them…and all too soon the biggest threat is to her heart.

But as Baden slips deeper into the abyss, she'll have to teach him to love…or lose him forever.

My Review:
I absolutely loved reading this book! Baden is a character that's been mentioned most of the series, but was only recently introduced. Katarina is a totally new character, and I really enjoyed getting to know her, though I wish we got a little bit more-the whole "nothing" bit and how that got in her head!

This book had a lot going on. Baden doing tasks for Hades, because of the wreaths, it basically makes him a slave. And one of those tasks-a coin that can make Hades grant you a wish, except things are more complicated then that-brings him in contact with Katarina. And of course, with his past, touch a pain, and the anger coming from the Wreaths via Destruction, well, Katarina trained him like she would her dogs!

Hades was a complicated character. He was the fiancé of Keeleycael., and yeah, he was really only introduced in The Darkest Touch. And the fact that the wreaths are parts of his burned heart, and that they're getting his memories, and aspects of him (Pandora the Hellhound, Baden the Beserker) and that if they're strong enough, they'll become his children, like William and Lucifer did...yeah. That was really interesting!

Then there were the hellhounds. They're a new addition to the series-because supposedly Hades wiped the species out, but of course Keeley saved them! And that Katarina got bonded to them, what with everybody basically saying she was the weak link, well, now she isn't anymore!

There are three story threads for upcoming stories that I noticed. Cameo with Lazarus (I hope), Galen and Legion/Honey, and Gillian and Pukinn! And I can't wait to read them! The whole Gillian/Pukinn marriage thing, well, yeah, that hurt, but I can't wait to see where it's going to lead!

It's been 3 years since Gillian joined the gain in The Darkest Pleasure, and it was Lucien and Anya's book before that. I don't remember which book in which they got engaged, or between which books, but they still aren't married! I just love this, being with these characters for so long that things like this happen. Another being that Urban and Ever are 8 months old now, though looking like 8 years old!

Fun fact that I don't know if we knew before or not, that Baden was the first Lord of the Underworld to be created! I have a very bad memory, even with books, series, and authors that I love, but I believe this is something new!

Reading the guide after this book, yeah, it revealed some things! Like Lucien has abilities that he hasn't tapped into-because he probably doesn't know about them. And the baby that Scarlet is pregnant with is going to be a game-changer, according to Hades!

Also mentioned in the guide, were Harbingers, and that Gena Showalter's excited about exploring then in the next book. And it was mentioned in this book that they were the creatures of Lucifer, or something along those lines. And William's blood relations who are looking for him! So yeah, excited!

I can't wait for The Darkest Promise, Cameo's book, and yeah, I just want more!

Author: Gena Showalter
Series: Lords of the Underworld #12
Read: June 1st, 2016
Source: Tuebl
Reason Why: Love her books so much! And it's a Prequel & Sequel Challenge 2016 book and a  WoW Book!
Publisher: Harlequin
Published: May 31st 2016