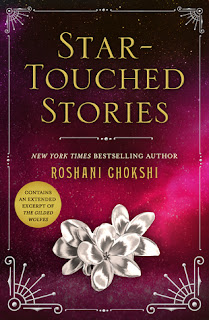 From Goodreads:
Three lush and adventurous stories in the Star-Touched World.

He was Lord of Death, cursed never to love. She was Night incarnate, destined to stay alone. After a chance meeting, they wonder if, perhaps, they could be meant for more. But danger crouches in their paths, and the choices they make will set them on a journey that will span lifetimes.

Now that her wish for a choice has come true, Aasha struggles to control her powers. But when an opportunity to help Queen Gauri and King Vikram's new reign presents itself, she is thrown into the path of the fearsome yet enchanting Spy Mistress. To help her friends, Aasha will have to battle her insecurities and perhaps, along the way, find love.

There is a tale whispered in the dark of the Empire of Bharat-Jain. A tale of a bride who loses her bridegroom on the eve of her wedding. But is it a tale or a truth?

My Review:
Wow, I really enjoyed reading this collection of stories. I'd already read Night and Death before, but that was awhile ago, so I'd forgotten a lot of it. It was so great to read about these characters some more, and these additional snippets into their lives!

Night and Death was so great to read! It's the story of what happened before Star-Touched Queen, and it explains why Star-Touched Queen happened. I really felt for the dude, his mom's shadow cursed him. And they thought they had beat it, but apparently not. But at least it gets fixed!

Poison and Gold, yeah, it was so great being in Aasha's head, since we hadn't been previously! I empathized with her lack of control over her powers. Her training to become the Spy Mistress was so interesting! Loved to read it!

Rose and Sword was bittersweet. I mean, it's the story of Gauri and Vikram's wedding, so it should be happy, right? Except that he kinda dies, and there's a journey Gauri has to go on. I loved how she was telling this story to her granddaughter, that was so sweet!

This collection of stories was so great, and I enjoyed reading it so much!