Week 33 Review: Liberty: The Spy Who (Kind Of) Liked Me 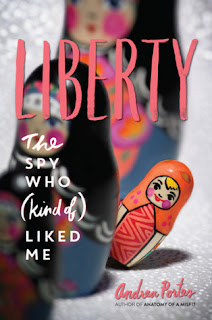 From Goodreads:
What is a hero? Paige Nolan knows.

Sean Raynes, the young man who exposed America's unconstitutional spying techniques, is a hero, even if half the dum-dums in the country think he's a traitor. And her journalist parents, who were captured by terrorists while telling stories of the endangered and oppressed—they were heroes, too. Or are—no one has ever told Paige if they're still alive, or dead.

Not heroes? Anyone in the government who abandoned her parents, letting them rot somewhere halfway across the world.

And certainly not Paige herself, who, despite her fluency in five languages and mastery of several obscure martial arts (thanks, Mom!), could do nothing to save them.

Couldn't, that is, until she's approached by Madden Carter, an undercover operative who gives her a mission: fly to Russia, find Raynes, and discover what other government secrets he's stockpiled. In exchange, he'll reopen the case on her missing parents.

She's given a code name and a cover as a foreign exchange student.

Who is a hero? Not Paige Nolan, but maybe, just maybe, Liberty is.

My Review:
I really enjoyed reading this book! It was a lot of fun, and I loved Paige's narration style, it was just so great to read! She was smart and quirky, and like she says in the book, there's not a tangent that she doesn't like. Just so much fun to read!

I really enjoyed the different parts of this book, the beginning when she's at school, the middle where she trained for spy work and started her missing, and the end with the end of her mission. I also really liked her narration of the chapters where there's video footage. Those were especially hilarious to read!

Paige made friends, really for the the first time, while on her mission. One her roommate who turned out to be a Russian spy, and the other, the sun of a criminal. I loved their interactions, and their relationships! So great to read about!

How it all wrapped up, yeah, that took some finagling! But that final action sequence was pretty funny, with how many different people who were after the guy! It kinda reminded me of Pirates of the Caribbean 2, everybody trying to get the prize! Such a great ending!

This book was so awesome and I enjoyed it a lot! So great to read!