Week 33 Review: The Raging Ones 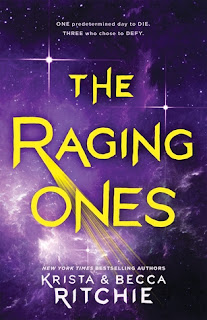 From Goodreads:
An edge of your seat sci-fi romance with twists and turns that you will never see coming!

In a freezing world, where everyone knows the day they will die, three teens break all odds.

Franny Bluecastle, a tough city teen, dreams of dying in opulence, to see wealth she's never known. Like the entire world, she believes it's impossible to dodge a deathday.

Until the day she does.

Court Icecastle knows wealth. He also knows pain. Spending five years in Vorkter Prison, a fortress of ice and suffering, he dreams of life beyond the people that haunt him and the world that imprisoned him.

Mykal Kickfall fights for those he loves. The rugged Hinterlander shares a frustrating yet unbreakable connection with Court—which only grows more lawless and chaotic as their senses and emotions connect with Franny.

With the threat of people learning they've dodged their deathdays, they must flee their planet to survive. But to do so, all three will have to hide their shared bond as they vie for a highly sought after spot in the newest mission to space. Against thousands of people far smarter, who'll live longer, and never fear death the way that they do.

My Review:
I enjoyed reading this book so much! It did take me a while to understand this world, the terms were used but not explicitly explained at first. Once I had working knowledge of them, though, I really enjoyed this story, because it was so creative, and I loved these characters!

These guys were in a lot of intense circumstances. What with the whole not dying on their death days, they were out of place in society. So there were a lot of tense situations because of that. Which, of course, was so great to read!

One thing really bugged me. That the fast trackers can't be in the arts, because they have to go to school. That's bull. School can give you technical skills, but it doesn't give the heart, you have to find it yourself. And living as they do, they'd have a lot of life experiences packed into what time they have, which they could pour into their art. This world is totally depriving themselves of some incredible artists, musicians, writers, and more.

Well, another thing. There were the two characters who built a computer, and then had it taken away and outlawed things that didn't work towards agriculture, given the crisis their planet has been dealing with. But that's just so short sighted! A computer could spread knowledge to that one person who could help solve the crisis (like here, education could teach the child who will one day cure cancer kind of idea). It can also help with communication, and with so much more. It could've had the side benefits of hopefully helping with the agriculture, and then had some full on benefits, but no, they had to be short sighted, stubborn, or not very intelligent!

That ending, yeah, it just kept coming and coming! After all that they'd been through to get to that point, sure, it was difficult. But it gave them the skills to do what they needed to do. And then there was that revelation, and it ended! Such an evil cliffhanger!

This book was so fantastic, I enjoyed it so much, and I can't wait for the sequel!