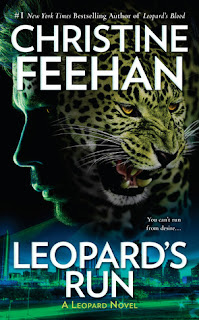 From Goodreads:
He keeps his emotions on a tight leash, but she can see the desire burning in his eyes...

Timur Amurov has one purpose in life: protect his family at all costs. With lethal skills honed from a violent upbringing, Timur is a leopard shifter who sees any newcomers as possible threats--and the petite blond barista who his sister-in-law, Evangeline, has hired to work in her bakery is definitely hiding something. While Timur still needs to determine if Ashe is an enemy, he does know that she is the only woman whose presence has ever truly calmed the beast roaring inside of him.

Ashe Bronte is well aware she has a type: sexy, gorgeous and dangerous as hell. Despite the fact that Timur is all those things and more, Ashe is in San Antonio for reasons that do not involve getting wild with a ruthless leopard--and she cannot afford to make any mistakes. But Timur has ignited something deep within her, and even though she knows she should keep her distance, every move he makes has her craving a taste...

My Review:
I enjoyed this book! This isn't my favourite of her series, I don't really like the whole
"they become or are crime bosses to stop the really bad crimes" thing. I also don't like the guys, because they're a little too alpha male bossy for my liking!

I did like this book, but I didn't love it, Timur was just too annoying for my tastes, which is fine, I'm just one person, and other readers and Ashe, will and do like him. I mean, sure, he's the security for his brother, but I think he took it too far. Bah.

I really enjoyed the tension in this book, of their uncles finding them. Those guys were evil, and the good guys knew they were coming, so yeah, there was a lot of emotions running high, which made for a good read!

That ending was pretty intense! I mean, Ashe told us that she had been trained by her parents, but there were a lot of threats, and yeah, watching her face off against them was pretty bad ass! I really enjoyed reading that!

I enjoyed this book, and I can't wait to have more from this series!