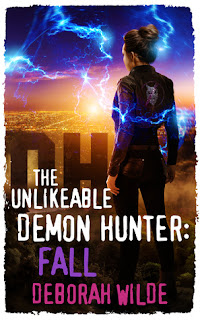 With the Brotherhood and certain witches gunning for Nava, people are taking bets on who will kill her first.

Not to mention that the shambles of her relationship have just been thrust into the spotlight for a mission to take down one of the deadliest demons she's faced yet. A demon who'll force her and Rohan to confront their own inner demons once and for all.

Nava heads to Los Angeles to make her bold play–on all fronts–but can she stop her foes before they destroy her for good?

And who else will have to die?

My Review:
Oh, wow, I loved reading this book! It was so fantastic, and so much happened, it was just incredible to read! I loved how much all of these characters have grown, but their journey isn't quite over yet, there's still one full length book left!

Poor Nava! After the events of the last book, yeah, she and Rohan weren't in a good spot. Neither were her brother and Kane. Both relationships have gone through the wringer, and yeah, I think both hit a turning point, which was really great to read!

There were a few things going on in this book. There was the new demon in L.A., there was the corrupt Brotherhood members, and then there was the rogue witch. So it was a lot to juggle, and was so great to read!

That ending was just out of this world! It just kept happening, more and more, and yeah, then it was over and it was just an evil cliffhanger ending! It brought in basically every important group, where control of the situation was like Davy Jones' heart in Pirates of the Caribbean: Dead Man's Chest, going back and forth, being struggled over! Which was so great to read, but then it wasn't resolved! I need more!

Loved this book so much, and I can't wait for the final one!