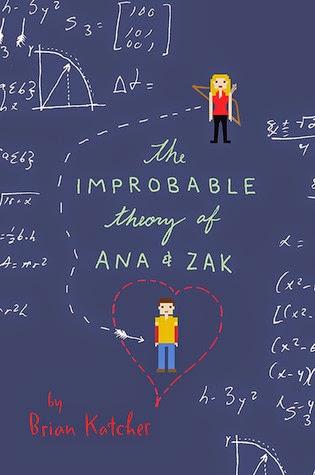 From Goodreads:
The Improbable Theory of Ana and Zak is Stonewall Book Award-winning author Brian Katcher's hilarious he said/she said romance about two teens recovering from heartbreak and discovering themselves on an out-of-this-world accidental first date.

It all begins when Ana Watson's little brother, Clayton, secretly ditches the quiz bowl semifinals to go to the Washingcon sci-fi convention on what should have been a normal, résumé-building school trip.

If slacker Zak Duquette hadn't talked up the geek fan fest so much, maybe Clayton wouldn't have broken nearly every school rule or jeopardized Ana's last shot at freedom from her uptight parents.

Now, teaming up with Duquette is the only way for Ana to chase down Clayton in the sea of orcs, zombies, bikini-clad princesses, Trekkies, and Smurfs. After all, one does not simply walk into Washingcon.

But in spite of Zak's devil-may-care attitude, he has his own reasons for being as lost as Ana-and Ana may have more in common with him than she thinks. Ana and Zak certainly don't expect the long crazy night, which begins as a nerdfighter manhunt, to transform into so much more…

I really enjoyed the relationship between Ana and Zak, she's the over-achiever, and he's the sci fi nerd, and yeah, they shouldn't fit, the whole improbable theory and all, but they were thrown together, and had all these intense experiences, yeah, it was so great to watch them come together!

I felt bad for Ana, with her parents kicking her sister out for getting pregnant, and feeling like she can't make a mistake or else the same thing will happen to her,  yeah, that's a pretty stressful situation! I really liked how it resolved, though!

So much happened in this book. From the quiz bowl to her brother running away, the different events they kept going to to find her brother, yeah, they had some pretty epic adventures! And a lot went wrong, and they were just trying to keep things from falling apart any further, it was just so great to read! Loved how everything worked out!

This book was so fantastic, and I enjoyed it so much! It was just such a great book!