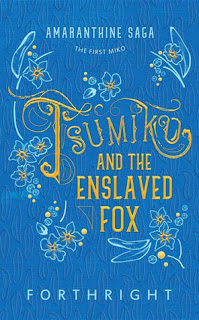 From Goodreads:
Tsumiko inherits an ancestral home, a vast fortune, and a butler who isn't exactly human.

Humanity is rocked by the Emergence of a people who call themselves the Amaranthine. They are our myths and legends come to life. Neither human nor animal, yet embracing qualities of both, the inhuman races inspire both awe and fear. Every newsfeed is clogged with updates about the peace process, but some places don't concern themselves with worldly affairs. Like the girls' school run by Saint Midori's of the Heavenly Lights, where Tsumiko Hajime grew up.

A letter from a long-lost aunt names Tsumiko heiress to an ancestral estate and its accompanying fortune. Only the legacy comes with an aloof heirloom: an inhuman butler. Argent has served the Hajime family for centuries, and Tsumiko must renew the generational bond or he'll die. Argent hates her for the hold she has over him, but he craves her soul almost as much as he craves his freedom.

My Review:
Oh, wow, I loved reading this book! It was so creative and quirky, and I enjoyed it so much! The whole concept of the Amarathine people, yeah, so interesting, and I'm so glad that it's a series so we can explore this world some more! So excited for that!

Tsumiku was an amazing character! I mean, she inherits a pretty wealthy estate-but she also inherits Argent. And she knows that's wrong, even as she starts to have an attachment to him. I really enjoyed their back and forth, as their relationship developed, it was so great to read!

This book did make me feel pretty dense. I would wonder why they were doing something, and then think, and oh, yeah, that's why! Which was a bit not fun, but it was such a great book and so enjoyable, so it wasn't too bad.

I'm so glad that there's going to be a sequel, and that it's going to have Tsumkiku's brother, which is so great, given the "egg" that is inside him, and how his roommate was thinking of how to hatch it. I want to see how that's going to play out, as well as was the accidental courtship that's in the synopsis of the next book!

This book was so incredible, and I can't wait for more!