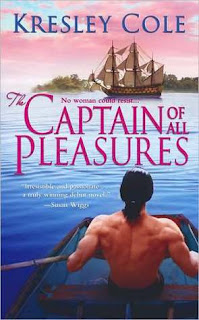 From Goodreads:
In her exhilarating debut novel, Kresley Cole captures the drama, passion, and boundless adventure of the high seas -- as one fiery lass finds herself caught in a tide of torrid romance.

Raised as a free spirit aboard her American sea captain father's majestic clipper ship, willful Nicole Lassiter has never encountered an obstacle she couldn't overcome -- until she meets Captain Derek Sutherland. His sizzling kisses leave her longing, but after they share a night of passion, his subsequent disdain makes her blood boil. Nicole vows to take her revenge -- by helping her father beat Sutherland in a high-stakes competition: the Great Circle Race from England to Australia.

Nicole's scheme is thrown overboard after her father is wrongly imprisoned, yet she remains undaunted -- taking to the high seas with her father's ship. But a storm wrecks her plans, and she finds herself a virtual prisoner aboard Sutherland's vessel. And while her mind tells her she should escape, her body urges her to surrender...

Why the time hasn't come yet...
I don't know, I don't think I have a copy. But I really enjoy her writing, so hopefully I'll read it soon! What about you guys? Happy reading!
Posted by Louisa @ Words I Write Crazy at 6:00 AM