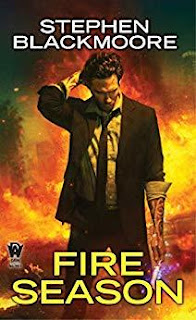 From Goodreads:
The fourth book of this dark urban fantasy series follows necromancer Eric Carter through a world of vengeful gods and goddesses, mysterious murders, and restless ghosts.

During one of the hottest summers the city has ever seen, someone is murdering mages with fires that burn when they shouldn't, that don't stop when they should. Necromancer Eric Carter is being framed for the killings and hunted by his own people.

To Carter, everything points to the god Quetzalcoatl coming after him, after he defied the mad wind god in the Aztec land of the dead. But too many things aren't adding up, and Carter knows there's more going on.

If he doesn't figure out what it is and put a stop to it fast, Quetzalcoatl won't just kill him, he'll burn the whole damn city down with him.

My Review:
Yeah! I've really been enjoying this series, so yeah, I was really excited to read this book! After the ending of Hungry Ghosts, I couldn't wait to see how things would play out from there, with Santa Muerte and Tabitha, and with the missing objects of power, the blade and the lighter. Yeah.

We got a few new characters in this book, Leticia, and others. I really enjoyed her interactions with Eric and the others, especially when the 3 ladies got together, that was a great scene! We also got to see Eric's inheritance that he was given at the last book, and there were some weird and important items collected!

I did kind of guess a bit of what was going to happen. I only got half of it, but yeah, that was a great feeling. In all the books but Hungry Ghosts, which had the whole hidden memory thing, Eric has come up with some crazy plans that are always so awesome to read!