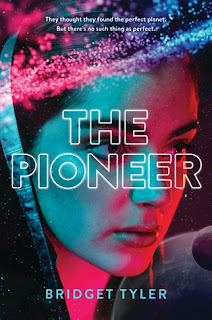 From Goodreads:
When Jo steps onto Tau Ceti E, it should be the happiest moment of her life. After all, she's been training for as long as she can remember to be a cadet pilot in the International Space Agency. She's dreamed of the day she and her family would leave Earth forever and begin life as pioneers on a new planet.

But now she can't stop thinking of everything that has gone wrong on their mission: the terrible accident that nearly destroyed their craft, that set their voyage back years, that killed her brother, that left her unable to fly…

As Jo struggles to live with her grief and figure out who she's going to be now, she falls in love with her new world. It isn't hard. Jo's team is camped out by a pristine, tumbling river at the base of a mountain range that looks like huge prisms buried in the prairie. The soring crystal peaks transform every sunset into rainbows full of colors human eyes have never seen before. And that's just the beginning. Tau offers Jo and her family a lifetime of beauty and adventure.

Jo throws herself into helping her team, lead by her commander mother, establish their community on this amazing new world. But just when she starts to feel like her old self again, she uncovers a devastating secret her mother has been keeping from her people. A secret that could destroy her family's pioneering dreams…if they survive that long.

With the fate of the pioneers in her hands, Jo must decide how far she's willing to go to expose the truth — before the truth destroys them all.

My Review:
Reading this book was so fantastic! Being a pioneer on a new planet, that's pretty awesome, though a bit scary. That secret that her mom was keeping though, that just ups the ante! I loved going along with Jo as she explored her new planet!

It's interesting, because the very beginning, there's a pretty intense scene. And then we skip forward in time after the loss of her brother, as well as her ability to pilot. Which basically means that she doesn't have a valuable skill besides general labor. Which gives her plenty of time to explore!

So much was going on, though it did start off slow. Besides the obvious sci fi, there was some romance, because of course! And there was action, because there was danger, and yeah, it was so entertaining to read!

That ending, wow, I should've expected it! After everything that happened, everything that they'd learned, they'd reached an uneasy truce. But with that ending, yeah, I don't know where things are going to go from there! I have so many questions and I can't wait to have them answered!

Loved reading this book, and I'm eager for the sequel!