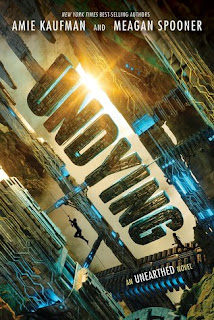 From Goodreads:
Trapped aboard the Undying's ancient spaceship and reeling from what they've learned there, scavenger Mia and academic Jules are plunged into a desperate race to warn their home planet of the danger humanity's greed has unleashed. From the mountains of Spain to the streets of Prague, the sequel to Unearthed is a white-knuckle ride that will send readers hurtling back to earth, and leave them breathless until the last page.

My Review:
Wow. this book was so fantastic to read! I enjoyed it so much, it was such a wild ride and so much happened and it was just so freaking great!

After the ending of Unearthed, yeah, I just just, well, dying to know what was going to happen next! It was pretty tense, being on the ship and trying to stay hidden! And then when they were back on Earth and nobody would believe them...not fun!

Mia and Jules adventures on Earth are slightly different. Because they're not on a foreign planet, and there's a ton more people, as well as some new characters like Dex and Atlanta, who had just slightly different slang, which was interesting to read!

We learned about the Undying, and who they are and why they look like humans. And yeah, it's pretty interesting. There was a seemingly throwaway line that was connected, and yeah, it was pretty great how it all came together! Oh, and we found out why there was some conflict within the Undying race in the message that they sent!

Loved reading this book, it was a fantastic bookend to the duology!

Authors: Amie Kaufman and Meagan Spooner
Series: Unearthed #2
Read: April 10th, 2019
Source: Ebook.bike
Reason Why: Loved the first book so much, it was so great, and it's a End of Series 2019 Book, Prequel & Sequel Challenge 2019 Book and a WoW Book!
Publisher: Hyperion
Published: January 22nd 2019