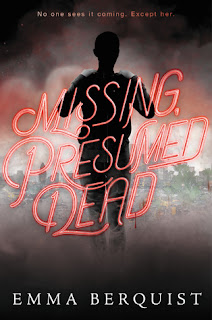 From Goodreads:
With a touch, Lexi can sense how and when someone will die. Some say it's a gift. But to Lexi it's a curse—one that keeps her friendless and alone. All that changes when Lexi foresees the violent death of a young woman, Jane, outside a club. But Jane doesn't go to the afterlife quietly. Her ghost remains behind, determined to hunt down her murderer, and she needs Lexi's help. In life, Jane was everything Lexi is not—outgoing, happy, popular. But in death, all Jane wants is revenge. Lexi will do anything to help Jane, to make up for the fact that she didn't—couldn't—save Jane's life, and to keep this beautiful ghost of a girl by her side for as long as possible.

My Review:
I enjoyed reading this book! Lexi is kinda a darker character, and who can blame her? She has this touch ability, and experiences when people die. And sees ghosts. And she lives by herself, well, and her ghost friend. Yeah.

I really enjoyed her and Jane together, Lexi feels pretty guilty about not doing anything to prevent Jane's death. And Jane wants revenge. There was something of a spark between them, too, so that was an interesting dynamic to read about while they were investigating her murder!

How Lexi's power works-and the fact that it's passed down in the family-is pretty interesting. And the fact that there's other people with powers, yeah, it made for an interesting world. I wouldn't mind another book in this world to explore more!

The mystery was pretty awesome. Well, in as far as a number of people being brutally killed and investigating that can be. I really enjoyed the twist and who it turned out to be, that was unexpected and I enjoyed it so much!

Yeah, I really enjoyed reading this book, it was a great read!